Film / An American Hippie in Israel 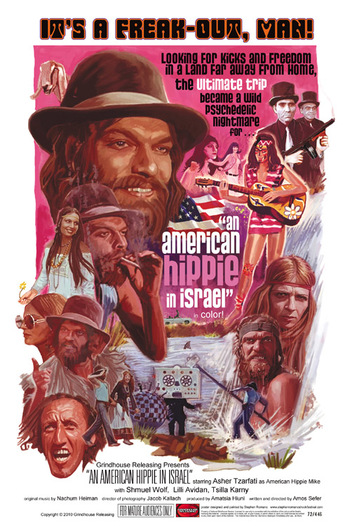 An American Hippie in Israel (Hebrew:הטרמפיסט - HaTrempist, literally "The Hitchhiker") is a 1972 Israeli countercultural film written and directed by Amos Sefer.

The plot involves an American ex-soldier named Mike (played by Asher Tzarfati) who travels to Israel to escape his memories of The Vietnam War. There, he meets three people who share his political beliefs. The group escapes to a small island after barely surviving being gunned down by a pair of stalking mimes. Communications grow sour, and they quickly turn against each other.

Long believed to be lost, the film was rediscovered in 2007 by film historian Yaniv Edelstein, who managed to locate a copy in the possession of one of the film's cast members. Upon its rediscovery, it was screened in Tel Aviv and quickly gained a cult following as a "midnight movie" in a manner similar to The Room. The film is generally regarded as So Bad, It's Good due to its mind-bending premise and numerous technical deficiencies in the areas of scripting, dialogue, cinematography, and English voice dubbing. It's certainly a rather... unique experience, that's for certain.