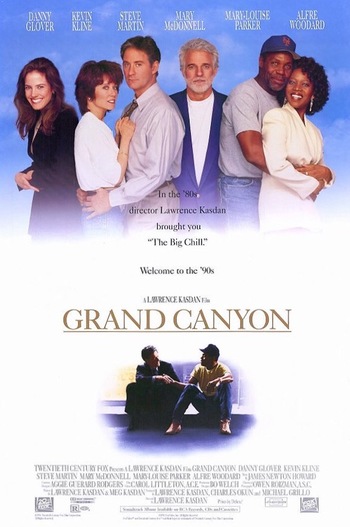 Simon: When you sit on the edge of that thing, you realize what a joke we people really are, what big heads we have thinking that what we do is gonna matter all that much, thinking that our time here means diddly to those rocks. Just a split second we've all been here, the whole lot of us. And one of us? That's a piece of time so small to get a name.
Mack: You trying to cheer me up?
Simon: Those rocks are laughing at me right now, me and my worries. Yeah, it's real humorous, that Grand Canyon. Its laughing at me right now. You know what I felt like? I felt like a gnat that lands on the ass of a cow chewing his cud on the side of the road that you drive by doing 70 mph.
Advertisement:

While driving home from a Lakers game one night, Mack takes a wrong turn, and his car breaks down on the Wrong Side of the Tracks. While waiting for a tow truck to arrive, he gets threatened by a group of black Gangbangers. Just when Mack thinks he's about to get mugged, or even murdered, Simon arrives in his tow truck. After Simon talks the gang bangers into leaving, a grateful Mack strikes up a friendship with him. Mack gradually becomes involved in Simon's life, going so far as to help his sister and nephew move to a better neighborhood, and to fix him up with Jane (Woodard), the best friend of Mack's secretary Dee (Parker). Meanwhile, Mack's wife Claire (McDonnell) is suffering from Empty Nest when their teenage son and only child Roberto (Sisto) goes to camp for the summer. While jogging one day, she finds an abandoned baby girl, and decides that she and Mack should adopt her. Finally, Davis (Martin), who is a producer of violent action movies and also Mack's best friend, gets shot in the leg while being mugged. While recovering from the gunshot wound, he reconsiders the direction of his life and his career.