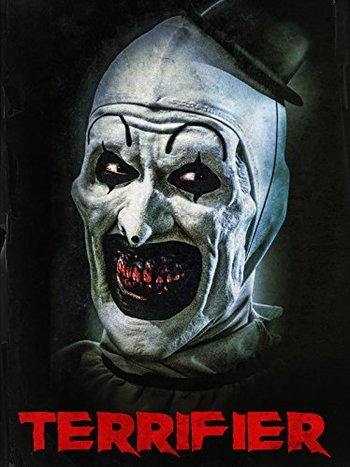 Terrifier is a 2017 Slasher Movie directed by Damien Leone, based on his short film of the same name that was featured in his 2013 effort, All Hallows' Eve.

Dawn and Tara are out on Halloween for a night of drinking and pizza. They run afoul of the maniacal Art the Clown, who takes a certain interest in them. When the two young women return to their car, they find a tire has been slashed, and Tara calls her sister to take her home. While they wait, a brutal double murder is committed inside the pizzeria they had just left. Thus begins a game of cat-and-mouse, where the women are chased by the psychotic clown, who horrifically slaughters anybody in his path.

It was screened in select theaters across the country starting on March 9th, 2018 and was released to VOD, Blu-Ray/DVD, and streaming on March 27th. Two sequels were announced in early 2019.