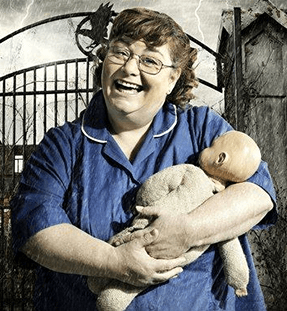 They're so cute at that age.
Advertisement:

This trope is when a mother, in a delusion, thinks that a doll is her child. It can be caused by guilt due to Parental Abandonment, trauma or artificial means. But no matter the means, the result is that the mother treats a doll as her child. If the real child is still around, she may treat him as an impostor, for added irony and sadness. The best-case scenario is that the mother is so wrapped up that she doesn't even realize that her real child is standing in front of her, and she thinks that the child is a stranger.

Compare Egg Sitting. Not a case of Artificial Humans. Replacement Goldfish are different, as the original child may still live, or may not exist at all. Also, being a Lonely Doll Girl or Living Doll Collector is not this.

There is some Truth in Television here, as there are women who purchase lifelike baby dolls and treat them as if they were real babies. Super realistic baby dolls (such as the famous Reborn line) are seen as sweet by some, spooky by others; they have therapeutic value for women who have miscarried, and elderly women in nursing homes (particularly memory-care units or dementia wards).