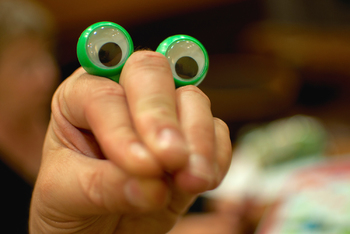 Splitting the difference between puppet shows and mime, this performance technique paints and/or costumes a human body part, usually the hand, to resemble an independent character. The performer then manipulates their decorated body part to create the semblance of life, often accompanying its movements with dialogue or sound effects via ventriloquism.

The hand is probably the most common body part employed for Bare Handed Puppetry, often by forming a loose fist, turning it sideways, and rocking the thumb up and down so that the gap between thumb and the palm's edge resembles a "mouth". Individual fingers are also a common choice, allowing multiple characters to be portrayed by a single performer. In filmed media, an actor's upside-down chin may be adorned with facial features so that the performer's real mouth is incorporated into the character. Pornographic variants featuring dressed-up genitalia also exist.