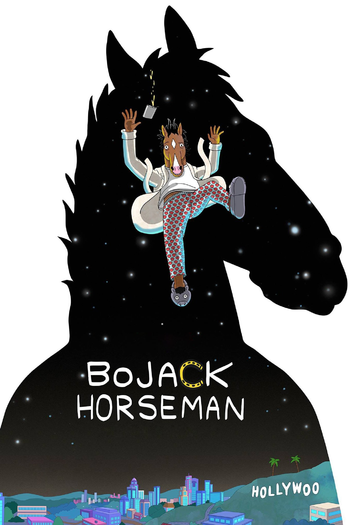 ♫ How much fits between the eyes of a horse? ♫
"It doesn't matter what we did in the past, or how we’ll be remembered. The only thing that matters is this moment, this one spectacular moment we are sharing together."
— BoJack Horseman
Advertisement:

Set In a World… where Funny Animals coexist with humans, the titular BoJack Horseman (Arnett) was previously the star of a popular sitcom in The '90s called Horsin' Around. Now a washed-up actor, BoJack lives in his luxurious Hollywoo (sic) home with his slacker roommate, Todd Chavez (Paul), drowning his empty former D-list celebrity life and other problems in a cocktail of drugs and booze. Clashing with his agent and on-again-off-again girlfriend, Princess Carolyn (Sedaris), BoJack is pushed to finish his memoirs to help him find any acting work.

Unable to write but desperate to be famous again, BoJack meets with ghostwriter Diane Nguyen (Brie), whom his publishing company has hired out of impatience. As BoJack begins to open up to and get to know her, he not only begins to face reality without the "help" of drugs and drink, but he also gets to know Diane as much as she knows him. The situation considering becomes complicated as BoJack starts wanting to date Diane, despite the fact she's dating BoJack's (self-proclaimed) "best friend" and happier counterpart, Mr. Peanutbutter (Tompkins). Ultimately, all five find themselves coming to terms with their personal flaws and inner demons, both in private and in public.

The series famously starts out following what is seemingly a typical sitcom format to tell more dramatic stories than has been typical of the genre. It broke the mold of its contemporaries, trading an abundance of shock value, celebrity pot-shots, and frequent cutaways for character-based humor, recurring jokes, and unflinching depictions of hot-button sociopolitical issues including mental illness, addiction, prejudice, and sexuality.

Despite an initially mixed critical response, its first season was popular enough to receive a second, and as it continued into the second half of The New '10s, it became a critical darling to extents unseen by most television of that decade if not of all time, live-action or animated. Its sixth and final season aired in two parts, one in October 2019 and the other in January 2020.

The series started airing on Comedy Central in September 2018, making it the first Netflix original series to be syndicated for U.S. cable television. Additionally, a Blu-ray of the first two seasons

was released in 2019, making it one of the first Netflix series to receive a non-streaming home video release.

maintained by the show's creators, as well as a Twitter

The series has a Recap page and a Best Episode Crowner

General trope examples:
♫ Back in the nineties, I was in a very famous TV show (Ooh)
I'm BoJack the Horse. (BoJack!) BoJack the Horse
Don't act like you don't know...
And I'm trying to hold on to my past
It's been so long I don't think I'm gonna last
I guess I'll just try and make you understand
That I'm more horse than a man
Or I'm more man than a horse... (BoJack!) ♫
Feedback

Example of:
Duel to the Death

Kyle and the Kids

Kyle and the Kids