WARNING: All episodes will have unmarked, uncensored spoilers. Proceed with caution! 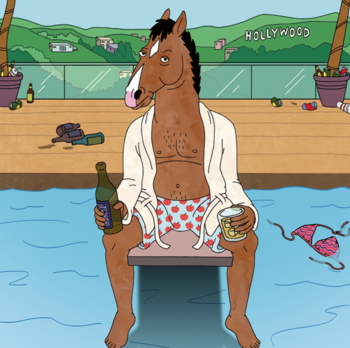 Meet the most beloved sitcom horse of The '90s... 20 years later.
"I think the show's actually pretty solid for what it is. It's not Ibsen, sure—but look, for a lot of people, life is just one long, hard kick in the urethra. And sometimes, when you get home from a long day of getting kicked in the urethra, you just want to watch a show about good, likable people who love each other. Where, y'know, no matter what happens, at the end of 30 minutes... everything's gonna turn out okay. Y'know, because in real life... Did I already say the thing about the urethra?"
— BoJack Horseman

BoJack Horseman, a washed-up TV actor famous for his role as the main character of a 90's sitcom, attempts to rise to popularity again by hiring Diane as a ghost writer to make his biography. They're joined by BoJack's former lover/agent Princess Carolyn, his rival and Diane's boyfriend Mr. Peanutbutter and BoJack's "roommate" Todd in their misadventures and attempts at becoming better people. 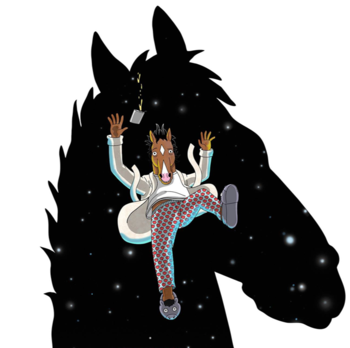 Don't look back. You're not going that way.
Mr. Peanutbutter: You're a millionaire movie star with a girlfriend who loves you, acting in your dream movie. What more do you want? What else could the universe possibly owe you?
Bojack: I... want to feel good about myself... the way you do. And I don't know how. I don't know if I can.

Following the release of his book, BoJack gets his dream ever since he entered Hollywoo, to play Secretariat in his biopic, falling in love with Wanda Pierce, a producer who has recently woken up from a 30-year-long coma in the process. Princess Carolyn starts feeling unappreciated in Vigor when her successes go unnoticed by the company and starts plotting with a coworker. Diane has to make new decisions in her life facing her 35th birthday and having to choose a cozy job in Hollywoo instead of traveling to a war-torn Cordovia. Mr. Peanutbutter faces a new moment in his career in television. Todd experiences a loss of purpose in his own life. 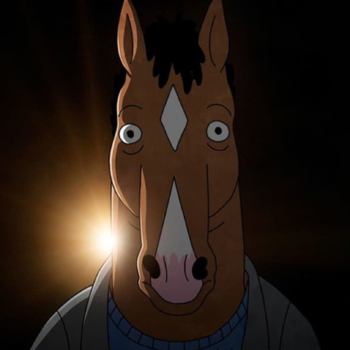 Soprano. Draper. Underwood. Horseman. note Not mentioned: White. As usual.
"This has been your dream for the last thirty years. You made it happen. An Oscar won't make you happy forever, it won't solve all your problems. You win that Oscar, the next day you go back to being you. But that night is a really good night. I think you deserve a really good night, and I know how to get you there. Do you want that?"
— Ana Spanakopita

Bojack is now on the run for a Oscar for his role in "Secretariat", and attempts to make the most of this while facing his own self-doubt on whether he deserves it or should win, alienating his friends in the process and with his new relationship. Mr. Peanutbutter and Diane face a new moment in their lives where they have to make new decisions about family, while Diane works with Princess Carolyn in her newly open agency and Mr. Peanutbutter, joined by Todd and his former girlfriend Emily to create a new business. 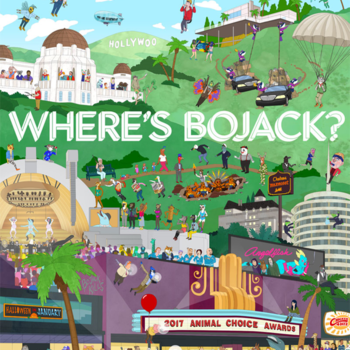 Answer: Not in this picture, so don't try to look for him.
Hollyhock: That voice... the one that tells you that you're worthless and stupid and ugly?
Bojack: Yeah?
Hollyhock: It goes away, right? It's just, like, a teenage girl thing but then it goes away?
Bojack: ...yeah.

Returning to Hollywoo after a prolonged absence, BoJack is approached by his possible illegitimate daughter Hollyhock, who enlists his help in a search for her own mother and accidentally ropes BoJack's mother Beatrice, who has succumbed to dementia, into his life again in the process. Mr. Peanutbutter's ex-wife Katrina convinces the former to run for governor, straining his relationship with Diane, who is attempting to use her new job in the varieties blog "Girl Croosh" to make a difference the best way she can. Princess Carolyn tries to start a family with Ralph. Todd starts a new weird business by himself and starts coming to terms with his new found sexuality. 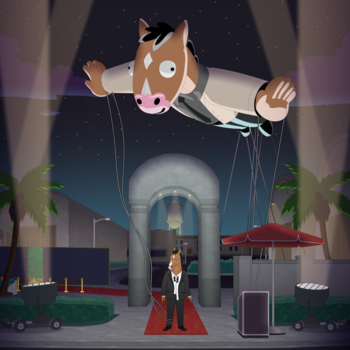 "This is going to be a sensational season of television."
"You say you want to get better and you don't know how."
— Diane Nguyen

Bojack starts his new career as the main star of the gritty detective show Philbert, which turns out to be as bad as he expected. Diane and Mr. Peanutbutter deal with their divorce the best they can: while Diane starts anew and starts co-writing Philbert, Mr. Peanutbutter joins the cast and starts dating the waitress Pickles. Princess Carolyn starts producing the show and the journey to get a baby from an adoption agency. Todd tries to see where his relationship with Yolanda can go and becomes the new head of WhatTimeIsItNow's streaming content. 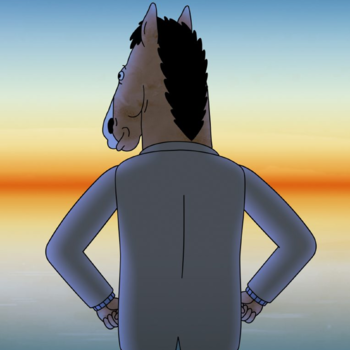 It's safe to say Horsin' Around won't be BoJack Horseman's only lasting legacy.
"I wasted so many years being miserable because I assumed that was the only way to be. I don't want to do that anymore."
— Excerpt of Bojack Horseman's rehab letter to Diane Nguyen

Christmas Special (2014)
A Christmas Episode was released after Season 1, which is treated as a short film separate from the rest of the series on Netflix.