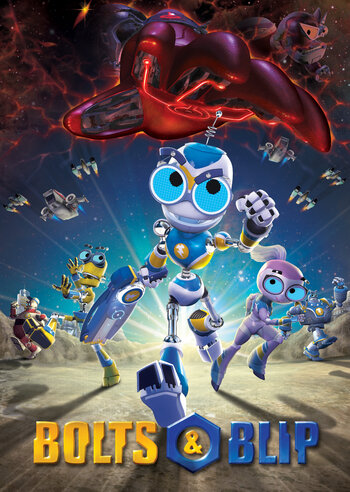 Bolts & Blip is a Canadian All-CGI Cartoon produced by the Korean-Canadian 3D-animation studio ToonBox Entertainment (the creators of The Nut Job). It was posthumously created by the late Canadian animator Andy Knight, founder of Red Rover Studios and creator of such cartoons as Ned's Newt, Pig City, and Get Ed.

In The Future, world peace has been achieved and disputes between the nations of Earth are now resolved by the Lunar League Games — a set of tournaments where robots compete in sporting events set in a robot city on the Moon known as Crater City. All these robots were built by the mysterious Dr. Tommy, except for the malevolent Bloodbots, which were built by his former colleague Dr. Blood, who wants to put an end to the Lunar League Games and conquer the Moon.

Enter Bolts and Blip, two best friends and polar opposites stuck in boring civilian jobs who both dream of taking part in the Lunar League games. Then one day, due to a computer error, they get their chance. Unfortunately, they end up on the lowest-ranked team in the whole league, the chronically losing Thunderbolts, whose notable members include a prototype fembot named Saedee who serves as team captain, the hot-headed Coach Gridiron, and diminutive assistant coach Steve. As a result, our two mechanical misfit friends find themselves in all sorts of shenanigans as they and their ragtag band of teammates try to climb their way to the top, dealing with such enemies as rival battlebots like the Lunar League's #1 player Tigrr Jaxxon and the dreaded Reformatter machine that turns poorly performing battlebots into common household appliances.

However, things aren't all fun and games as Blip slowly starts uncovering evidence of a conspiracy about the full extent of Dr. Blood's plans to conquer the Moon and how ordinary robots like him are central to both starting Dr. Blood's conquest and thwarting the entire scheme...

The series debuted in June 28, 2010 on Teletoon, running for a single season of 26 episodes. It later aired in the United States in 2013 as part of the Vortexx block on The CW. During its run in America, the series became notable for being the only new cartoon to premiere in the very last season of broadcast network Saturday Morning Cartoons.

Bolts and Blip provides examples of: