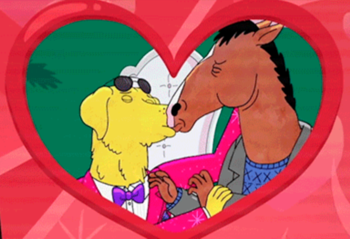 And this is just a taste of their complex relationship. Notice how much Mr. Peanutbutter is enjoying it.
Advertisement:

As much as Bojack Horseman deals with depression, existentialism dread and full-blown absurdism, there's no denying that there's a lot of subtext in which the male cast has shown to be a bit...too close.

open/close all folders
BoJack/Mr. Peanutbutter
If one were to be dropped into one of the moments these two share on-screen, you might confuse their banter with Belligerent Sexual Tension or even to think they're a couple already. Their Vitriolic Best Buds routine and Mr. Peanutbutter's relentless desire for BoJack to like him certainly do not help. Nor does the fact that certainnote a lot of people, actually portions of the fanbase do ship them.

The BoJack Horseman Story: Chapter One

Our A-Story Is A D-Story