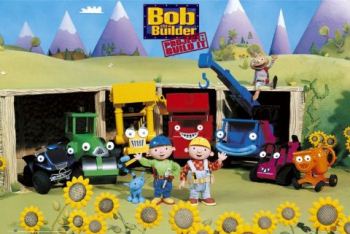 Can we fix it?note Yes we can!

Bob the Builder is a BBC children's series produced by Hit Entertainment, first broadcast in 1998 which involves the eponymous manual labourer and a group of living construction vehicles accompanied by rock music. The original series (up until the conclusion of Ready, Steady, Build) was regularly broadcast on CBeebies (the BBC's channel for young children).

In 2015, the series was rebooted with new designs and animation by Mainframe Entertainment for Seasons 1 and 2.

This programme contains examples of: