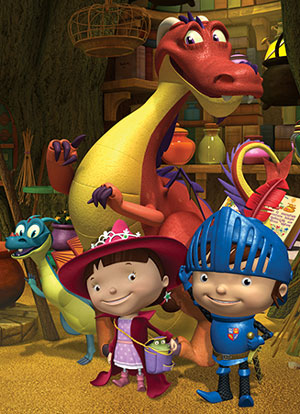 Mike the Knight is a British-Canadian CGI Preschool Show produced by Nelvana and HIT Entertainment and created by Alexander Bar that aired on Treehouse TV and Nick Jr. from 2011 to 2017 with 75 episodes over 3 seasons.

The show's title character is a young knight-in-training who happily lives in a castle. His parents are the king and queen of the land, but his father is a knight currently away on a quest. Mike deeply admires his father and tries his best to protect the kingdom and the queen. Alongside his horse Galahad, his magician friend Evie, and two dragon companions named Sparkie and Squirt, Mike always tries to emulate the ideal knight to the best of his ability. While his inexperience means he regularly makes mistakes and messes up, Mike always makes the effort to fix his mistakes and make everyone happy, learning a lesson or two along the way.

Sparkle and Squirt get hungry for some pies.

Sparkle and Squirt get hungry for some pies.