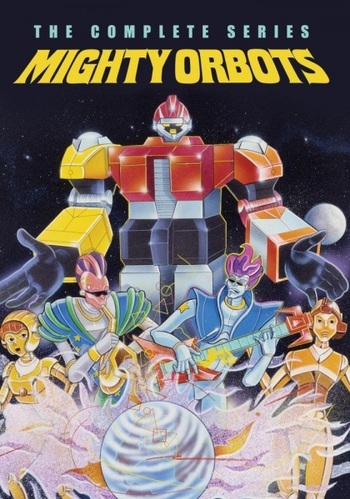 Mighty Orbots is an American/Japanese animated series co-produced by ABC, Metro-Goldwyn-Mayer and TMS Entertainment that aired in 1984 on Saturday mornings in the United States.

The 23rd Century is a time of robots and aliens. The people of Earth have banded together along with several other alien races to promote peace throughout the galaxy, forming the United Planets. As part of the United Planets, the Galactic Patrol - a body of law-enforcers - works to maintain order, under the leadership of Commander Rondu.

However, a powerful criminal organization called SHADOW is out to destroy both the Galactic Patrol and the U.P. Led by Umbra, a massive cyborg-computer, SHADOW employs sinister agents and incredible schemes to attack and someday rule over all corners of the known galaxy.

There is one thing that helps to fight against SHADOW; ingenious inventor Rob Simmons - secretly a member of the Galactic Patrol - creates six special robots (Boo, Bo, Bort, Crunch, Tor, and Ohno) who can use their unique powers to battle against the forces of Umbra. Together, these robots can unite to form a Humongous Mecha called Mighty Orbots, to fight for truth, justice and peace for all.

Despite being an 80s Super Robot anime, Mighty Orbots is notable for its lack of Mech vs. Beast-centric storytelling note  The show was animated in Japan, but the scripts were by western writers who probably had no exposure to such anime. . Not that such never happened—in fact the Orbots threw down with giant monsters and mecha with great regularity—but that those conflicts were always solved through methods besides obliterating the enemy with a barrage of Toyetic weaponry. Instead, Mighty Orbots played out more like a Superhero show in a Space Opera setting.

The series was notable for its anime stylings and high production values – both rare for Saturday morning television in the mid-1980s. However, Executive Meddling - that is, a lawsuit from Tonka over similarities to their Gobots toylinenote which was actually a U.S. release of Bandai's Machine Robo series - Mighty Orbots was a Palette Swap of Bandai's non-Gobot Godmars figure, but the distinction escaped Tonka's legal team. - put this series on ice after one season.

In 2018, it finally saw a complete home video release.

This cartoon shows examples of the following: