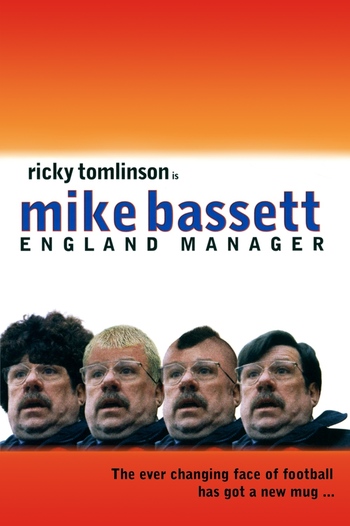 A mockumentary released in 2001, based around the rather stressful job of the England national football manager. It was inspired by a real fly-on-the-wall documentary, An Impossible Job, which followed England manager Graham Taylor and England's ultimately unsuccessful bid to qualify for the 1994 World Cup.
Advertisement:

England manager Phil Cope has suffered a heart attack during England's stuttering campaign to qualify for the 2002 World Cup in Brazil. None of the English managers in the Premier League are interested in taking the job (well, one is, but the Football Association aren't interested in him). No high profile manager abroad wants the job, either.

In desperation, the FA turn to Mike Bassett (Ricky Tomlinson), manager of second tier club Norwich City, and it soon becomes apparent that while Mike has all the enthusiasm in the world, he lacks the necessary managerial nous. England's qualifying campaign goes From Bad to Worse, and they're forced to rely on a flukish combination of results to get through to the World Cup itself. Things eventually get better once they arrive in Brazil, but not before they get a whole lot worse...

The film was followed by a TV series, Mike Bassett: Manager, wherein Mike returns to take charge of his childhood heroes, Wirral County. Unfortunately it got stuck in development hell for four years due to money wrangles, meaning that it was released to a somewhat decent reception, but unimpressive viewing figures.

A second film, Mike Bassett: Interim Manager was in development, but appears to have dropped into Development Hell following the failure of a Kickstarter campaign.