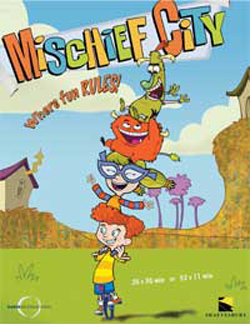 Mischief City is a Canadian animated children's show based on the 1986 picture book of the same name by English–Canadian author children's author Tim Wynne-Jones. It was produced by the Canadian television company, Shaftesbury Films, who are better known for their live-action shows like Life with Derek and Murdoch Mysteries.

The series follows Winchell Adams (voiced by Austin Di Iulio, best known for Timothy Goes to School), an eight-year-old boy who is often whisked away to the fantastical world of Mischief City where he has misadventures with a girl named Maxine (Annick Obonsawin) and her two pet monsters, Hey Hey (Adrian Truss) and Mr. Cube (John Stocker). However, the four often run into conflict with Maxine’s nasty older brother Duane (Peter Oldring) and his pet monster/sidekick Mr. Square (Frank Welker).

The show ran on YTV and lasted for a total of two seasons of twenty-six episodes from January 4 to January 18, 2005.