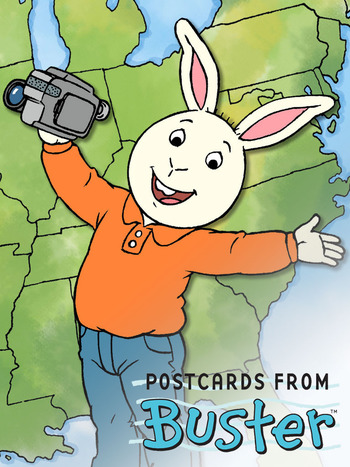 In 2003, the PBS Kids series Arthur aired an episode called "Postcards from Buster", where Buster leaves to travel across North America (as well as nearby parts of the world) with his airline-pilot father. Buster's travels were chronicled in this Spin-Off, which ran for 55 episodes.

In this show, Buster recorded his experiences around the world (mainly North America) for his video postcards. In every episode, he interacted with live-action children as he learned more about the locations he was visiting.

A dog eats all of Buster's (edible) Mother's Day presents.

Example of:
Faint in Shock

A dog eats all of Buster's (edible) Mother's Day presents.