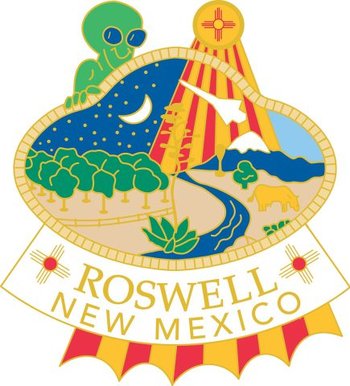 The official city seal of Roswell, NM
"Is there any secret technology that hasn't come from Roswell? That flying saucer must have been ten miles in diameter!"
— Captain Proton, Plan 7 of 9 from Outer Space
Advertisement:

On July 7, 1947, personnel from the Roswell Army Air Field recovered materials from a ranch outside Roswell, New Mexico. Their initial press release stated that the materials resembled a "flying disc"; later the same day, they issued a correction that it was in fact a weather balloon, which is quite the switch.

The Roswell Incident was forgotten for over 30 years, until ufologist Stanton Friedman interviewed Major Jesse Marcel about it in 1978. Marcel claimed that the government had pressured him and other eyewitnesses into silence about what they had seen: the object recovered from Roswell was a spacecraft containing alien bodies. Interviews with other witnesses added to the story until it grew into a major piece of UFO lore. In the '90s, the government offered a new explanation of the events: there was a coverup, but it was to hide the existence of Project Mogul

, not aliens (note that in both versions of the story, the debris was from high-altitude balloons). In light of this, and the questionable research of some Roswell conspiracy theorists, even most serious pro-UFO advocates have become convinced there were no aliens involved.

of what's known), the idea of a crashed alien spacecraft—and a subsequent government coverup - has become permanently associated with the city of Roswell in the popular imagination. The fame and ambiguity of the original incident have inspired every Speculative Fiction series ever to explain (or just make an oblique reference to) "what really happened", with varying amounts of seriousness. The town itself, meanwhile, has capitalized on this, building a lucrative tourist industry around the event and aliens in general.

Named after an Emmy award-winning episode of Futurama, which posited that the entire incident was caused by the Planet Express ship accidentally travelling back in time and showing up in Roswell on that fateful day. The "flying disc" in question is actually a deconstructed Bender's "shiny metal ass".

The wreckage and bodies from Roswell may be stored in Area 51. At least one Alien Autopsy may have been performed and videotaped. The Men in Black may be involved in the coverup. And we may have reaped the wreckage for our own technological benefit. (But there probably isn't, there probably wasn't, they probably weren't, and we probably didn't. Makes for good plot fodder nonetheless.)

Compare The Tunguska Event (the loose Russian equivalent), Salem Is Witch Country (another American small town that's indelibly associated in media with "news of the weird" from its past).