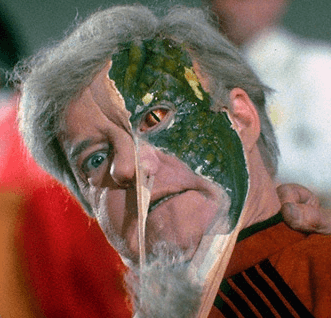 He sits like a man, but he smiles like a reptile …
"Snake people, or 'Sneople', control our government at the highest levels!"
— Ronaldo Fryman, Steven Universe, "Keep Beach City Weird"
Advertisement:

Lizard Folk and Snake People. They seem shifty. They have a snake's hypnotic-seeming eyes, and they do weird things like shed their skin. Everyone says they aren't real, but how can we be sure? What if they're just hiding and controlling our society from the shadows?

This is an idea that's bounced back and forth between fiction and the fringes of Conspiracy Theories for about a century now.

They may be an Alien Invasion, an ancient race dwelling Beneath the Earth or in the Hollow Earth (possibly descended from Living Dinosaurs), demons, or Ancient Aliens descended from the dinosaurs living underground pretending to be demons. Often they're here To Serve Man, and they're even more likely than most Lizard Folk and Snake People to be Always Chaotic Evil and to fall under Reptiles Are Abhorrent. They may be, or make, Half-Human Hybrids. Unfortunately, as with a lot of conspiracy theories, this trope has a worrying tendency to veer into antisemitic territory, often at least presenting the Reptilians as Space Jews, if not outright claiming that actual Jews are either the Reptilians themselves or their (witting or unwitting) pawns.

They're typically, although not always, using some sort of Human Disguise so that They Look Like Us Now — which sometimes becomes the only element of this trope present if they're not actually hiding. These mean you have a whole race of Shapeshifting Tricksters using Voluntary Shapeshifting, Psychic Powers, Holograms, Illusion Magic, Mass Hypnosis, Glamour, Genuine Human Hide, Demonic Possession, a Mind-Control Conspiracy, Hypnotic Eyes, Subliminal Advertising, etc. Common tropes here are The Corruption, Artificial Hybrid or Transformation of the Possessed (if they convert humans into Reptilians), Appearance Is in the Eye of the Beholder, Weirdness Censor, and Invisible to Normals (for more mental/illusion-based disguises) Glamour Failure, Eyes Are Mental, or Immune to Mind Control (The Hero — and the audience — have to identify them somehow), Kill and Replace (an easy way to take over — present in the original King Kull story from 1929), Deprogram (when it's especially hard to free yourself from their control).

Since this is such a ridiculed real-world conspiracy theory, it may be Invoked and Discussed to demonstrate how crazy a Conspiracy Theorist character is — and sometimes doubly subverted if The Cuckoolander Was Right and they really do exist.

Trope Maker was Robert E. Howard in his Kull story "The Shadow Kingdom" for Weird Tales in August 1929.

A sub-trope of The Conspiracy, Scaled Up, and either Lizard Folk or Snake People.