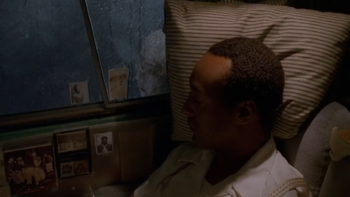 In the Big Inning
Written and directed by David Duchovny
Mulder: Let me get this straight: a free-spirited alien fell in love with baseball and ran away from the other non-fun-having aliens and made himself black, because that would prevent him from getting to the majors where his unspeakable secret might be discovered by an intrusive press and public and you're also implying that...
Arthur: You certainly have a knack for turning chicken salad into chicken spit.
Advertisement:

An old photograph takes Mulder back to Arthur Dales, the Father of the X-Files. It turns out the photo is actually of Dales's brother (M. Emmet Walsh), also named Arthur, who tells Mulder about a case in Roswell in the 1940s involving an alien (Jesse L. Martin) who just wanted to play baseball.