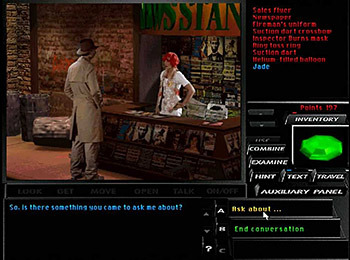 "Look, prophecies aren't in my job description, OK? I'm just a humble P.I. trying to save the world as we know it."
— Tex Murphy, Under a Killing Moon
Advertisement:

Access would go on to make five games; The sequel to Mean Streets, Martian Memorandum (1991), was released strictly for the IBM PC and was not terribly revolutionary. The third game, Under a Killing Moon (1994), was a whole different ball game: it introduced a 3D virtual world and made extensive use of full motion video cutscenes. The fourth game, The Pandora Directive (1996), included the same system and was Access' most ambitious effort. Number five, Overseer (1998), was essentially a replay of Mean Streets, but brought into the modern video game era with Access' usual movie work.

Tex Murphy's setting is a post-apocalyptic America after World War III. Tex, a gritty Private Detective who lives in San Francisco, is genetically resistant to the effects of radiation but lives amongst numerous mutants. He tries to tiptoe along the dangerous fault lines between the world of the mutants and the world of the "norms".

The plots of the five games can generally be summarized thusly: Tex is down on his luck, has no money and is largely reduced to eating dog food. A client appears and offers him a relatively simple job: Find a MacGuffin, track down my friend, etc. In the course of his investigations, Tex discovers that he is a pawn in a plot to bring about The End of the World as We Know It. He then saves the world, making sardonic quips along the way.

At least two additional games were planned, but they were binned when Microsoft bought Access in 1998 and sold it to Take Two Interactive. Take Two eventually shut down Access, apparently killing the Tex Murphy franchise. However, the original developers eventually formed Big Finish Games, acquired the rights to the series (via a clever loophole thanks to the novelizations that series creator Chris Jones had written), and teased fans with the announcement of "Secret Project Fedora".

After years of speculation they finally confirmed that Fedora was indeed a new Tex Murphy game and eventually released it as Tesla Effect on May 7th, 2014 after a very successful Kickstarter project

. It was published by Atlus in addition to the Kickstarter backing.

A Fan Remake of Overseer called The Poisoned Pawn is in development, Access Software were initially working with them but this stopped due to creative differences (but the remake was allowed to continue.), the novelization of The Poisoned Pawn by the series writter Aaron Conners, however, was released in 2021.

You can get the Tex Murphy games at GOG.com