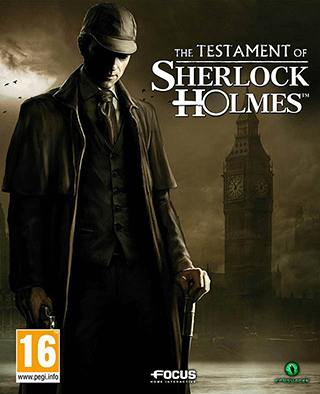 A 2012 Adventure Game by Frogwares, and the 6th entry in the Adventures of Sherlock Holmes series.

Unlike the last few games in the series, Testament does not feature any influences from other contemporary sources (those past "crossovers" being with H.P. Lovecraft, Arsène Lupin and Jack the Ripper), instead focusing on the relationship between Holmes and Watson as they find themselves embroiled in an intricate and sordid criminal investigation.

And as Holmes finds his integrity being questioned in the papers, with his methods becoming gradually more questionable and secretive, even Watson has to start considering just how far he's willing to trust his old friend.

The Testament of Sherlock Holmes contains examples of: