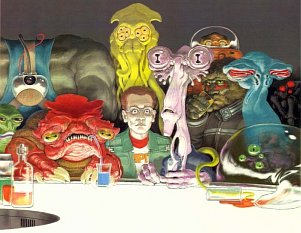 Yeah, if that human was me, I'd have that expression on my face too.
The Space Bar is an adventure game co-developed by Boffo Games, written by Steve Meretzky (of A Mind Forever Voyaging fame), and published by Rocket Science Games and SegaSoft in 1997. The game featured a 3-D environment which allowed the player to rotate (as opposed to Rocket Science's earlier production Obsidian, in which the camera was usually fixed), and a humorous cast of aliens in the framework of a mystery. The player fills the role of a detective, interacting with characters and objects via a first-person interface. The name itself is a pun, as the game takes place in a bar in outer space—literally a "space bar" rather than the space bar found on a computer's keyboard.
Advertisement:

An intergalactic PI named Maksh has been kidnapped. Also, an evil shape-shifter is hunting for a special data storage unit. His partner, Alias Node, has been assigned to track him down. As Alias Node, you track down the shape-shifter to a bar, much like the Mos Eisley cantina, where your goal is to find the fate of your partner, and the alien who is disguising as the shape-shifter.

You, however, have a special ability, the ability to form a mind meld with beings. You can inhabit the patrons of the bar in an effort to locate your partner and the shape-shifter. With this special ability, the game is divided into six mini-games as you search each alien for an explanation. A unique twist is that you view each game as that alien would see the world, whether as an insect, a potato, or a being with three sexes. You're able to tackle each part of the game separately, and come and go as you please in this 360-degree panorama adventure game.

This game contain examples of: