Alias Node
"I got lots of time and lots of curiosity. Let's hear your story."

The main player character, a detective working for a corporate security force and tasked with finding and stopping a dangerous criminal. Although a bit of a joke to his colleagues, he's skilled at Empathy Telepathy, which allows him to live through others' memories, and cares deeply for his partner, Maksh. 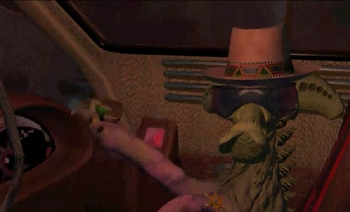 Alias Node's Marmali partner and friend. Not especially bright and quite lazy, but he has a good heart and is shown to have stood up for Alias numerous times. Has a wife and kidlets.
Zelda 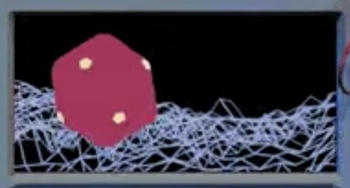 "Perhaps you should resort to using Disk 2"

An AI designed to assist you and the voice of your PDA. She tells you how to use some of your equipment and keeps running commentary throughout the game. Represented by some abstract shapes whenever she speaks.

"If you so much as wave an appendage cuff at someone without conclusive evidence, your butts will be in jail and I will personally swallow the key! Now, go!" 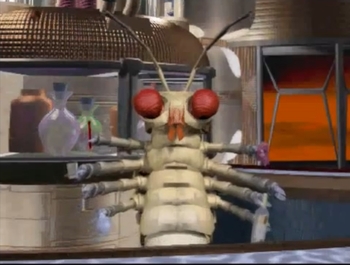 "My orders are to remain here on Armpit VI. Of course, it is possible that I may some day get a countermanding order..."
The bartender of The Thirsty Tentacle, a member of the insectoid Zzazzl race, once tasked with an important mission from Queen Zoonz.
Cilia 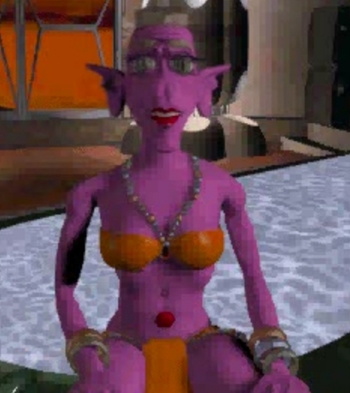 "Let's focus on escaping until we get caught. Then we'll worry about being caught."
A Trisecks belly dancer and a former resistance agent from the marshy planet U'Bleek. Was once a fighter against the oppressive Akro Mati regime but has since drifted from her goal after suffering a tragic loss.
Bettaker aka Dirtkicker 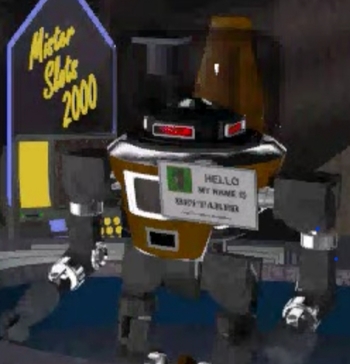 "It has been most bitter and frustrating. I was exiled most unjustly."

A Vildroid "bonkier" at the Bibblebonk table in the bar's casino. He was once a well-known sports star on his home planet Savin III and harbors resentments about his downfall. 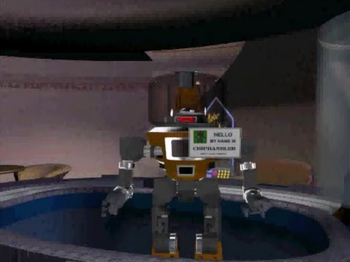 "If you are not interested in Bibblebonk, I am programmed to make pleasant conversation.
Another Vildroid working in the casinio. Bettaker's nemesis. 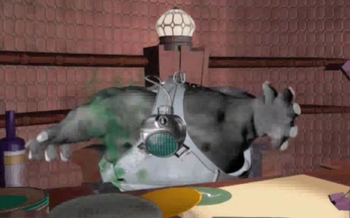 "Better be DAMN important!"
The owner of The Thirsty Tentacle, an unscrupulous Blobster who oversees all from his hidden office above the bar. 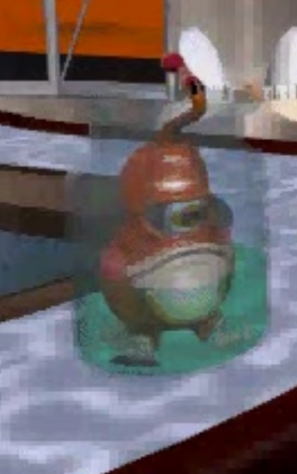 A Neblitzi would-be space navigator, he is a short, anglerfish-like creature, confined to a mayonnaise jar and reliant on his mate, Thud, to get around. Very easy to upset.
Thud 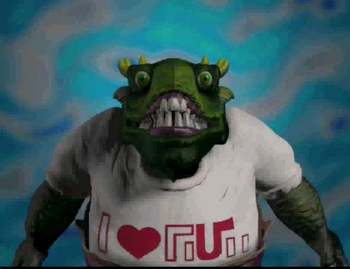 "WHAT YOU WAAAAANT?"
An exceptionally dim but good-natured Salivraster who serves as the muscle for his mate, Fleebix, and transports him around.
Seedrot 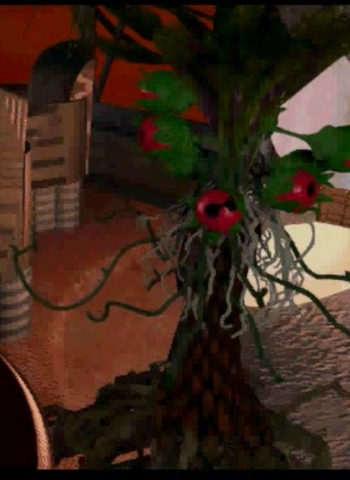 "I can hardly wait to get off this lousy planet and get on with my life!"
A member of the plantlike Vedj species, she once had hopes of being a freedom fighter but is currently drifting from job to job as a waitress "slinging hash all over the galaxy."
Click Snap Snap Rattle 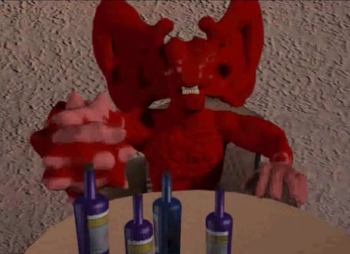 "I could help you, I think. For a price."
A drug-dealing Auditon with supersonic hearing from a sunless jungle planet. He prides himself on his homemade batch of "cerebomb", but has dreams of running his own operation one day.
Deven- 7 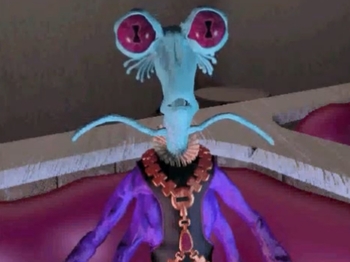 "I must be mad to waste my insanely valuable time talking to an obscure nothing such as yourself."
A snobby Sraffan real estate broker and art collector. He helps buy and sell planets for a living and has made a fortune doing so. He and some of his employees show up at the bar later on in the evening to celebrate a successful deal.
Ni'Dopol

"Stay out of my way, and don't force my hand. After all, it holds the life of your beloved partner."

The game's Big Bad, a dangerous master thief and corporate spy fully capable of murder. He's somewhere in The Thirsty Tentacle and will flee on a shuttle if Alias doesn't find him in time. Father of Ni'Purth.

this is part of what makes him such an ominous presence.
Gus 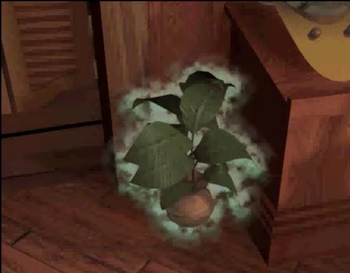 An unnervingly upbeat Wispowurwee living inside of a plant in the bar's cowboy-themed saloon. 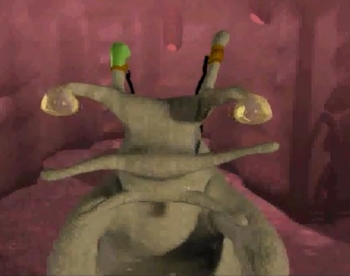 "I'd shrug, except I don't have any shoulders."
A slow-moving Molassoid found hanging out in the Steamy Parlor. 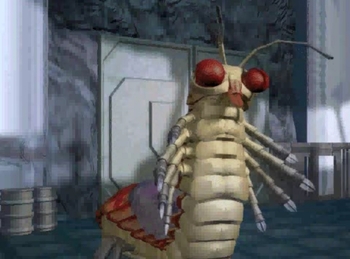 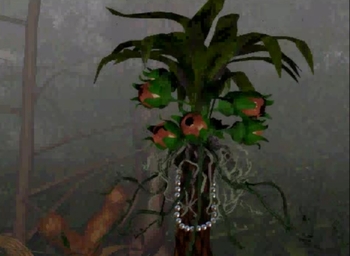 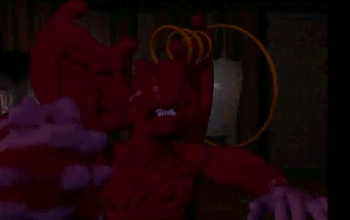 "I don't know what your story is, buddy, but you should do something about your voice. I can't understand a thing you're saying."

The Queep trainer encountered in the Room of Barks outside the spaceport in Click Snap Snap Rattle's flashback. 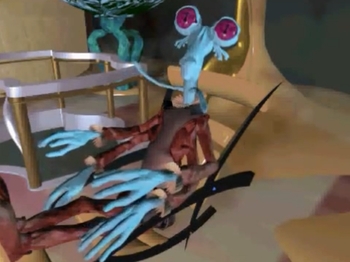 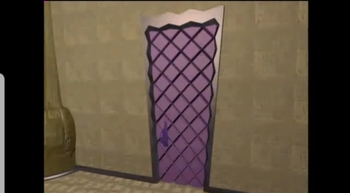 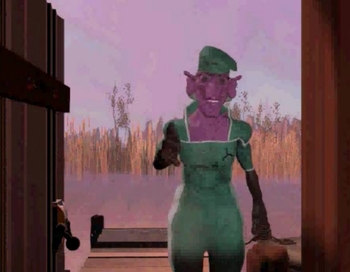 "If the Trisecks are to escape total slavery, the corporation must know!"
A Trisecks rebel on U'Bleek, seen delivering an important package in Cilia's flashback.
Barman 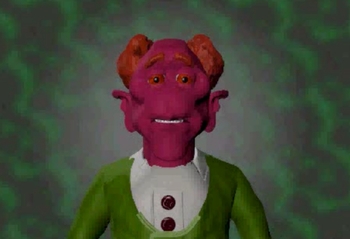 "Oh, don't worry about me. I'll just follow you around."

Cilia's Beta Mate, a timid male Trisecks we meet in her flashback. 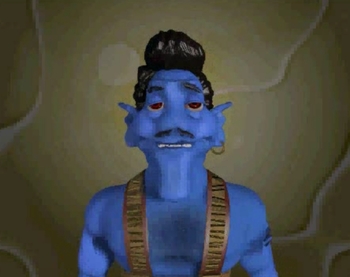 "I love it when you tell me what to do."
Cilia's macho Alpha Mate, as seen in her flashback. Murdered by the Akro Mati, which is part of why Cilia can't remember her contact's name.
Ni'Purth

The son and accomplice of the infamous Kur'Pupu thief Ni'Dopol. Mentioned throughout the game, finally seen during Ni'Dopol's flashback in the form of a Marmali officer.