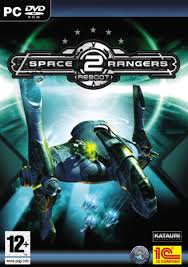 A series of top-down Wide-Open Sandbox games released for Windows by Russian developer Elemental Games. So far, two games have been released, with both games having very similar gameplay.
Advertisement:

In Space Rangers, a powerful alien ship called "Makhpella" and its fleet of battleships known as the "Klissans" invade our region of the galaxy. Five races have formed a loose confederation against it, known as the "Interstellar Coalition": The brutish Maloq, the lawless Peleng, the tech-loving Faeyans, the enlightened Gaalians, and the business-minded humans.

The player takes the role of a young pilot voluntarily enlisting into the titular organization known as the Space Rangers. Space Rangers are tasked with defeating the Klissans, but are given full freedom in deciding how to do so. You can fight the Klissans directly on your own, salvaging their technology and researching ways to defeat them. You can trade commodities between planets and earn enough money to turn your ship into a juggernaut. You can raid civilian ships as a pirate, and you can even perform diplomatic errands. Whichever way you choose, your ultimate task is to become powerful enough to drive the Klissans back and eliminate the Makhpella.

On the whole, Space Rangers is played as a top-down, turn-based tactical game coupled with considerable RPG Elements. You fly your ship from star to star, planet to planet, fighting the enemy (whoever you choose it to be at any given time), upgrading your ship, trading cargo, and so forth. Everything is done using a simple point-and-click interface. However, at many points in the game, gameplay changes radically, incorporating mini-games that are very different from this style. Major diplomatic quests require playing text-based mini-adventures (some of which are remarkably complex). Wormholes take you to another dimension which plays like a classic Shoot 'em Up. The second game even features a rudimentary Real-Time Strategy mini-game with giant robots for units (inspired by ZX Spectrum game Nether Earth). Overall it's no surprise That Other Wiki classifies it as a "Multi Genre" game. Of course, since the game is extremely open-ended, no one forces you to play any of these if they do not suit your style.

Very importantly, the game world is constantly being simulated in the background regardless of what the player is doing. The program controls all enemy ships, civilian and military ships, and even a slew of other Space Rangers who are constantly competing for the highest ranking. While the player may be passing time waiting for his satellites to finish scanning a dead planet, entire battles are fought over star systems on the other side of the quadrant. The enemy and the Coalition send ships at each other, attempt to stay technologically ahead of each other, and prices change according to the lively traffic of trading ships across all sectors of space. In fact, on the easier difficulty levels it is possible for the Coalition to push the enemy to the brink of destruction all by themselves!

The second game (Space Rangers 2) can be seen as an advanced version of the first game, offering many features that the first game did not have while keeping the same gameplay style. The story is almost the same too: The defeated Klissan mothership Makhpella has given rise to three separate races of machines that now seek to destroy the Interstellar Coalition as well as each other - so now you have three major enemies instead of one, but everything else is largely the same. Nonetheless, thanks to the success of the original, the second game features much higher production quality, and a lot more content.

Although released for the Russian market, which consistently shows more interest in slower, smarter games, Space Rangers 2 did surprisingly well in the West for its genre. This is despite an entirely inconsistent quality of translation, which left some texts almost undecipherable (and some quests ridiculously difficult to complete). Both games were eventually released as a complete box set known in Europe under the name Space Rangers: Reboot, which contained both the original and Rise of the Dominators combined with the expansion pack. Don't be fooled too much by the name, though. In America, Space Rangers: Reboot refers only to the expansion pack. Both games used to be on Steam, and 2 also used to be available on GOG.com, but both versions were taken off of both services by the publisher, most likely due to the release of the HD remake. Currently, the only game in the series that can be purchased is the HD remake, which makes the games preceding it very difficult to obtain.

The HD remake includes the expansion and new content. A few developers of the team behind the HD remake were involved in the development of the original game or its expansion. The game got a decent English translation (from scratch) and a release outside of Russia in October 2013.

Not to be confused with the short-lived 1993 television series of the same name, with Power Rangers in Space, or Buzz Lightyear's job.