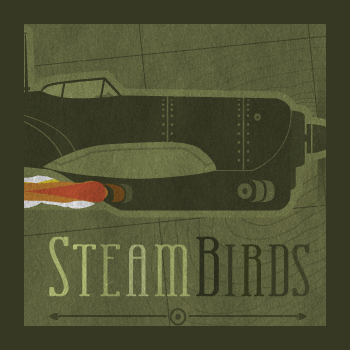 The plane that won the World Wars... OF STEAM!
"The Battle of London - October 15th, 1940. The Axis' flying armada is en route to London. The Allies are outnumbered 1000 to 1. You cannot save the city, but you can stall the armada long enough for London's citizens to evacuate. Good luck and Godspeed, pilot."
—Steambirds: Survival opening speech
Advertisement:

A zany, addicting flash game series and iTouch app (The original can be found here

and Survival can be found here

The story is vaguely told in the mission descriptions. As can be followed, the timeline moves forward in a very In Spite of a Nail fashion, with World War I occurring in a reasonably similar fashion to our own with similar dates, albeit with heavily increased emphasis on air superiority. However, the timeline begins to diverge more in World War II, which opens with the nuking of Paris by Axis Germany. Continuing in that vein, Britain is subsequently invaded by an overwhelming German air force utilizing advanced bioweapons. Despite this, by some unknown providence of fate, they are able to push the Germans back and end the war in 1956.

Despite the less-than-plausible timeline, the game is genuinely fun, utilizing a self-contained mission structure. Within the iTunes app and first flash version, each mission provides a number of planes, typically between two and four, and a (usually) substantially larger enemy force to defeat. This is achieved by directing your planes' movement (they fire automatically when an enemy enters their firing arc) and usage of special weapons. Stars are awarded for your performance, ranging from four for not taking a hit, to one for coming out with one Hit Point left.

In Steambirds: Survival, a spin-off game, you play an Endless Game reenactment of this world's version of the Battle of Britain (called in-universe the "Gassing of London"), where you're tasked with making a Last Stand in order to buy time for escaping Londoners—ranging from orphans to Parliament—by taking as many Germans down with you as possible. You earn "copper," which is used to buy more advanced aircraft until you can buy the Allurbase airship.