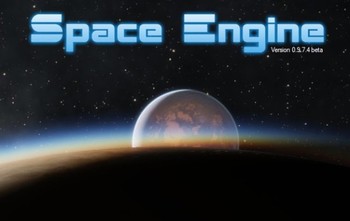 Gives a whole new meaning to being "lost in space".
"Space Engine is a realistic virtual Universe you can explore on your computer. You can travel from star to star, from galaxy to galaxy, landing on any planet, moon, or asteroid with the ability to explore its alien landscape. You can alter the speed of time and observe any celestial phenomena you please. All transitions are completely seamless, and this virtual universe has a size of billions of light-years across and contains trillions upon trillions of planetary systems. The procedural generation is based on real scientific knowledge, so Space Engine depicts the universe the way it is thought to be by modern science. Real celestial objects are also present if you want to visit them, including the planets and moons of our Solar system, thousands of nearby stars with newly discovered exoplanets, and thousands of galaxies that are currently known".
— Vladimir Romanyuk, creator of the software, who goes by the nickname "SpaceEngineer"
Advertisement:

Space Engine is a Wide-Open Sandbox Universe simulator being developed by Vladimir Romanyuk, where you can explore thousands upon billions of stars, planets, moons, galaxies, and other celestial objects. The simulation offers a wide variety of both real life catalogued objects, and procedural-generated objects to explore to your liking, and other features that are currently available include being able to command and pilot spaceships for realistic space flight.

The game is available in Early Access on Steam, though older legacy versions are available for free on the main website. The game is, at the moment, only available on PC, though it does support Virtual Reality play in addition to traditional mouse and keyboard.

Not to be confused with Space Engineers.