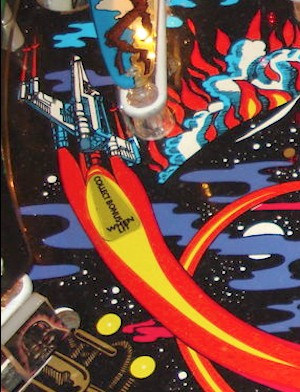 Space Is Air when a work treats spacecraft as if they were aircraft; they bank into turns, keep their engines firing at all times, and may even have wings built into their design. Aircraft-style design can be justified if the spacecraft is capable of operating in atmosphere as well as in space (like the space shuttle), but the main reason that this trope exists is because audiences are more familiar with how airplanes work than with how spaceships work. Thus, creators treat spaceships as if they are simply airplanes in space instead of using realistic physics, in order to avoid confusing the audience. This isn't necessarily a bad thing — after all, it can be used to great effect to make things look really cool — but it does push things down toward the softer end of sci-fi.

The way airplanes work is dependent on the fact that they're travelling through the atmosphere. Wings provide lift, flaps and rudders can reorient the plane by redirecting airflow, and their engines must be on constantly in order to counteract the effects of friction and gravity — wings generate lift only when there's airflow across them, so a certain minimum airspeed is absolutely necessary for them to work. Because space is a vacuum, none of these things apply to spaceships — wings and flaps are useless, and the engine only needs to be on when the ship is changing speed or direction. This means that spacecraft use dedicated thrusters to reorient themselves, and change direction in sharp bursts rather than gradually. If you see a spaceship changing direction without using maneuvering rockets, or making wide, sweeping turns, then that's because Space Is Air. Many movies who feel obliged to acknowledge the lack of sound in space will nonetheless accompany motions of spacecraft or planets with deep, low frequency whooshing sounds, as if they were creating rushing currents of air. This trope occasionally extends to natural phenomena; for instance, the Sun is sometimes depicted, particularly in children's fiction, as literally on fire, implying that space is full of air to let it burn. Comets are almost always shown moving in the opposite direction to their tails, as if they were moving through air and their tails were the trails they left behind.

A subtrope of Artistic License – Space, and sister trope to Space Is an Ocean. Also a frequent cause of Space Friction, and may be why Batman Can Breathe in Space. If you see Old School Dogfighting in space, it's usually because this trope is in effect; it also dictates the appearance of many Space Fighters.