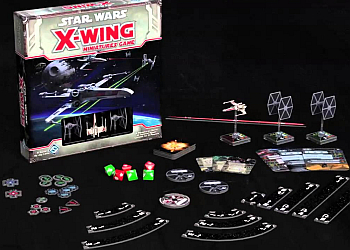 A miniatures game by Fantasy Flight Games based on Star Wars and inspired by the star fighter battles within. The game is focused on the Galactic Civil War of the original trilogy and features most of the fighters from the films and many of the fighters from various other sources, including comics and video games. It is the sister game to Star Wars Armada.

There were originally two factions, the Rebel Alliance and the Galactic Empire. While all types of ships are on both sides, Rebel ships tend to be tough, but with high point costs, while Imperial ships tend to cost few point, but are expendable. Wave 6 introduces a third faction, Scum and Villainy, based on various third-party characters and factions from the Galactic Civil War era, including a few characters already in the game, including Boba Fett and Kath Scarlett, both of whom were originally added as Empire aligned pilots of the Firespray-31, as well as a few ships recycled from the Rebels, including the Y-Wing and HWK-290. Wave 8 added the Resistance and the First Order, sub-factions that for gameplay purposes are considered extensions of the Rebels and Empire respectively.

The game is very streamlined with every ship using a series of templates for movement and shooting as well as using specially designed dice for determining shooting results. This simplifies the game considerably and means that the game takes minutes to learn, but much longer to master. The core set comes with an X-Wing, two TIE Fighters and everything else needed to play a small two-player game. A second, updated core set (accounting for various additions and alterations to the game rules over the course of the first 8 waves) does the same, but instead comes with a T-70 X-wing and two TIE/fo Fighters.

WizKids licensed the X-Wing Miniatures system from Fantasy Flight to make a version of it based on Star Trek called Star Trek Attack Wing.

A second edition was announced in May of 2018, and was released in mid-September of that year. It revamped the rules and increased the number of factions to five (separating First Order and the Resistance from their original trilogy counterparts) and later to seven (introducing the Clone Wars era factions, Separatists and the Republic).

In November 2020, Fantasy Flight Games' parent company Asmodee USA reorganized their subsidiaries to create specialization. As such, Fantasy Flight lost control of Star Wars Legion, Star Wars: Armada, and Star Wars: X-wing the Miniatures Game to Atomic Mass Games. Shortly thereafter, AMG released their own "update", termed 2.5 to the rules to bring it more in line with their other table top games. These changes were controversial within the community itself and as such there remain strong followings for both