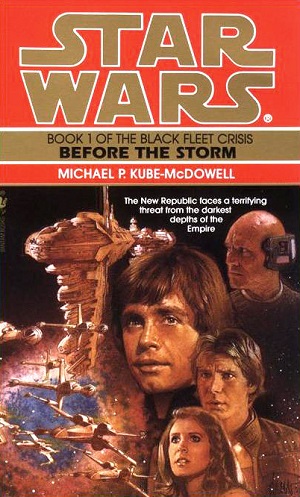 is a trilogy in the Star Wars Legends Expanded Universe, consisting of Before the Storm, Shield of Lies, and Tyrant's Test. Written by Michael P. Kube-McDowell, this is known to be one of the more Military Science Fiction books in the SWEU, with great attention paid to ships and their positioning.
Advertisement:

Luke Skywalker shirks his responsibilities to go on a wild bantha chase to find his mother, and meets an all-female group of Force users. Han Solo and Leia, meanwhile, have to deal with the bigoted Yevetha. At the same time, Lando heads off on an even wilder bantha hunt, chasing after a wandering ship called the Teljlkon Vagabond which ends up being as essential to the plot as Luke's mother.