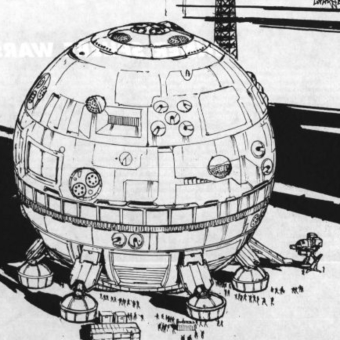 Note the Humongous Mecha* Approximate height for that Timberwolf is 12 meters and the large turrets.
"All hands to the Escape Testicle!"
— Starship Hooters 3: Undresser
Advertisement:

A Sci-Fi plot calls for a vehicle that can land on an alien planet and be somewhat badass. A Space Plane would be cool, but you'd need a runway. So instead, you have a Drop Ship shaped roughly like a sphere that consists of a vertically mounted rocket engine surrounded by landing struts, fuel, cargo, a control room, and usually a ramp to offload personnel and cargo. The type of engine is unimportant. It can be an actual rocket or a Hand Waved "antigravity generator" or "reactionless thruster".