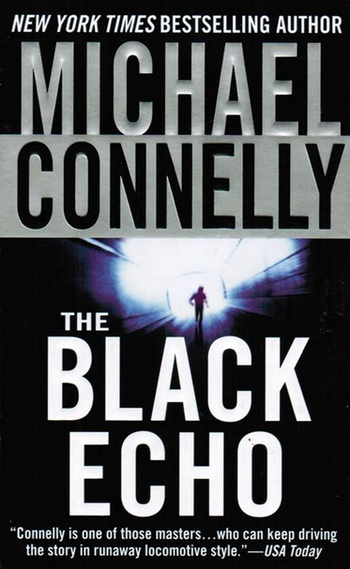 The Black Echo is a 1992 novel by Michael Connelly. It was Connelly's debut novel, and as such was also the debut novel for his most famous character, world-weary LAPD detective Hieronymus "Harry" Bosch.
Advertisement:

Detective Harry Bosch is a 40-year-old investigator with Hollywood homicide, having been recently demoted from the elite Robbery-Homicide division after a questionable shooting of a suspect. He is called out to a crime scene that appears to be a case of a heroin addict crawling up a drain pipe and giving himself a fatal overdose. Bosch is suspicious, and soon figures out that it was murder. He also realizes that the victim, one William Meadows, was a member of a "tunnel rat" unit fighting the VC in underground tunnels in Vietnam—the same unit that Bosch himself was in as a young man. In fact, the two knew each other.

Bosch's dogged persistence reveals a connection between Meadows and a recent unsolved bank robbery in which the robbers tunneled into the bank, Meadows having been part of the team due to his experience in Vietnam with tunnel warfare. Bank robbery is a federal beef and thus Bosch winds up meeting FBI Special Agent Eleanor Wish, who herself has a connection with The Vietnam War: her older brother fought there and never came back. Harry and Eleanor fall in love, and while they're doing that, they're also busy untangling a dark mystery that stretches back to Saigon over 20 years ago.