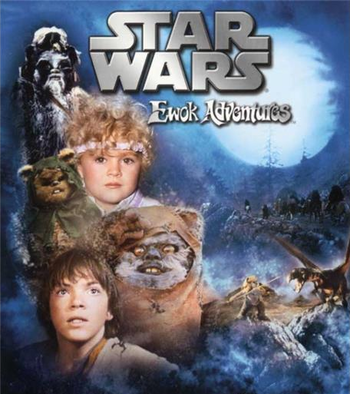 In the mid-1980s, two Star Wars Legends Made-for-TV Movies were produced: The Ewok Adventure (1984), later retitled Caravan of Courage: An Ewok Adventure, and Ewoks: The Battle for Endor (1985). They star a young child, Cindel, whose family has crash-landed on Endor, and Wicket, the Ewok who befriended Leia in Return of the Jedi. The success of these movies led to an animated series, Ewoks, which ran for two seasons. The main character, Cindel, got a cameo much later in the Legends novel trilogy Black Fleet Crisis as a reporter, and Teek was featured in the safety video for Star Tours prior to the 2011 refurbishment.
Advertisement:

In 2004, the movies were released on a double-feature DVD under the title Star Wars: Ewok Adventures, and later launched on Disney+ in April 2021.

Caravan of Courage contains examples of:

Ewoks: The Battle for Endor contains examples of:

Izrina, the queen of the Wisties, is clearly cartoonish, and interacts with people who are live-action.

Izrina, the queen of the Wisties, is clearly cartoonish, and interacts with people who are live-action.