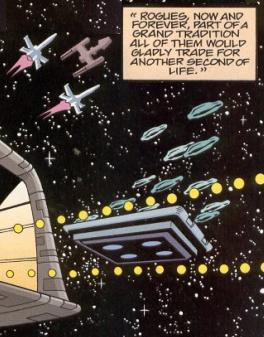 Too many to remember. Too many to allow to be forgotten.
"From the stars we came, and to the stars we return, from now until the end of time. We therefore commit this body to the deep."
— Babylon 5

Because Space Is an Ocean, you need some equivalent of Burial at Sea. And because you can't really throw a dead body over the "side" of a space ship, some more dramatic means of getting the body out of the ship is required.

Usually the deceased is placed in a "space coffin". In some cases the coffin is actually a torpedo, which is shot out of the ship's torpedo tubes. It may even explode, indicating that not only is it a torpedo but that it is actually armed. In less drastic examples, the coffin is taken out through the airlocks by mourners in space suits and allowed to simply drift off into space. Alternatively, you could Hurl It into the Sun - cremation by star is not that bad of a funeral.