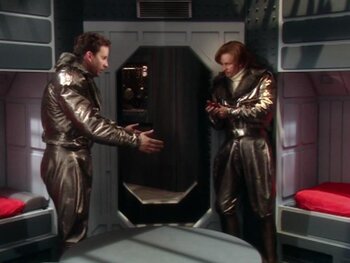 It's another day in the life for Ace Rimmer, otherdimensional hero extraordinaire, as he fights a platoon of Nazis, surfs through the air on a crocodile, saves the beautiful Princess Beryl Bonjella, and escapes on a flying motorcycle.

Back with Starbug, Lister's using the AR machine to get sexed again, this time dragging an unwilling and embarrassed Kryten along as he seduces the Queen of Camelot by cheating in a jousting match. His ill-gotten fun is interrupted by the AR machine going on the blink, as Starbug goes to hell. The already beaten-up ship's systems are being played with by something jumping into existence nearby. So, they're in trouble and doomed. Pretty normal morning for them.

Fortunately, it's just Ace showing up to say "hi". Rimmer is not enthusiastic about seeing his much better, handsome, cleverer counterpart reappearing, and has to be guilted into spending time with him by the others. Once they're alone, Ace collapses onto the nearest bed. See, one of them Nazis got in a lucky shot, and besides ruining his best top, also hit his light bee. Ace is dying, with about twenty-four hours left. And he wants Rimmer to be his successor.

Yeah. Rimmer as the next Ace. Ol' Ironbutt isn't exactly on-board with this either, and is dubious about it being his "destiny". He storms off. Later, Rimmer fills in Lister on a few things. For starters, the reason for the light bee. This Ace isn't the Ace he met all those years ago. That Ace tragically caught the wrong end of a neutron tank in another dimension, but he trained a successor, who trained another successor, and another... and now it's Arnie's turn to be the hero. Problem is, he's Arnold Judas Rimmer. Lister goes to have a talk with Rimmer, and by "talk" we mean "The Reason You Suck" Speech, calling him a "gormless, brainless, directionless, neurotic, cowardly pile of smeg", who could never be remotely heroic.

That successfully motivates Rimmer into getting off his behind and attempting to become Ace. But training doesn't go well. All the inspiring words about becoming the unfettered cougar can't make Rimmer what he isn't, and Ace is getting too weak to really do much else. So, in desperation, he uses his own light bee remote to make Rimmer look like him. If he can fool the others into thinking he is Ace, that'll be a start.

It kind of works, though Kryten does notice "Ace" is suddenly sounding much more weasel-y than before. As Rimmer walks about the ship, he encounters a knight from the AR program, having somehow become real and gone looking for revenge on Sir Lister of Smeg for that whole thing with the queen. Acting quickly, and avoiding the knight's sword, Rimmer grabs a bazookoid and blows the knight away. Elated at his success at doing something slightly badass, he rushes back to Ace's room. And then the knight gets up, revealing himself to be Lister, who'd swapped out the bazookoid's ammo with blanks.

On reaching Ace, Rimmer gets there just in time for him to go up to the officer's mess in the sky, followed shortly by the rest of the Boys coming in. With a little misleading from Lister, they're led to believe it's Rimmer who died, thanks to a knight from the AR program, and "Ace" stopped him. Later, Lister and Rimmer have a talk in the engine room. Rimmer's still not convinced he can be a hero of any kind. Lister shows Rimmer the casket Ace provided, which has been fitted with a homing beacon what will take the light bee to its final resting place. Ace told Lister to follow the beacon, should Rimmer need help changing his mind.

A short time later, and a fake funeral is held for Alexander the Great's former eunuch. Even Rachel "attends", being the closest thing Rimmer has to a widow. As a mark of respect, Lister places a small medal on the small casket to honor First Officer Rimmer, then sends it off through the waste disposal unit. The homing device activated, Starbug follows the tiny casket across space, on and on, and on... until the little casket reaches its destination.

Thousands upon thousands of similar little caskets, all forming a massive planetary ring, a memorial to all the Aces who've come before. As an awed Rimmer looks at them, Lister asks if he's really going to be the one to break the chain.

Having decided he isn't, Rimmer, now trying to be Ace, makes his goodbyes and boards Ace's ship. He still hasn't completely got it, though, first flubbing up Ace's catchphrase, and then ejecting himself by mistake.