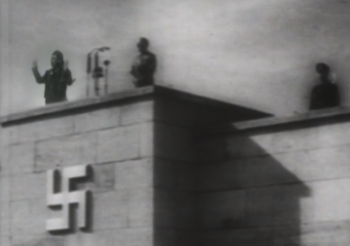 "Ignore him! He's a complete and total nutter, and he's only got one testicle!"
Advertisement:

Lister is in a bad state at the start of this episode. He's fed up with all the insane, pointless ways he's gone through to pass the time as the last human being alive, from table golf to unicycle jousting, and he's sick of it. He vents while popping the bubbles on a "tension sheet", and Rimmer complains because it's just a piece of bubble-wrap painted red — which was "invented" by a schoolmate of his who became ridiculously wealthy as a result.

Meanwhile, Kryten is developing photographs and discovers that the fluid has mutated: the photographs not only move, but act as windows into history. They can't step outside the frame, but they can talk to and interact with the people inside. After a few experiments (including Lister getting into a fist-fight with Hitler) Lister decides to change history by giving his younger self the idea for the Tension Sheet, thereby sidestepping Red Dwarf entirely. The crew visits young Lister (played by Emile Charles, Craig Charles' brother) who dismisses them as "crypto-fascist," but when they return to Red Dwarf, the change goes through. Lister vanishes, followed by Kryten and Cat. This leaves Rimmer, alone on a spaceship with Holly, for eternity.

Rimmer decides "nobly" to rescue Lister from his disgustingly rich and famous lifestyle, but fails to convince him (as Lister has never met Rimmer). So Rimmer decides to try fixing history in his own favor. He visits his old school and gives his younger self detailed instructions, instructions which are overheard by another boy who keeps interrupting. And when he returns... everyone comes back. Nothing is changed. All Rimmer has done is put things back to how they were. But with one exception: he's no longer a hologram.

Rimmer exults, delighting in touch and food, while the others shuffle off (because they don't know that anything is different). With one last triumphant cry of "I! AM! ALIVE!" Rimmer brings his fists down on two crates. Which are marked "Explosives." And dies.