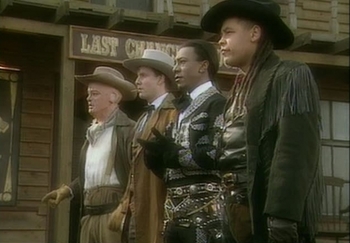 The day begins with Lister misuing the VR simulator to have sex with the femme fatale in the simulator's crime noir game. Kryten has to go in and fetch him, since they need everything off - Starbug's passing through rogue Simulant territory, and they don't want to be caught. The simulants cruise around space looking for a fight worthy of their mettle, not something that's ever going to describe Starbug, but they also really, really hate humans.

So naturally, they notice Starbug. Even Lister's plan to disguise himself as Tarka Daal, ambassador of the human-hating Great Vindaloovian Empire, doesn't work. The Simulant captain is a little miffed at the sheer lack of competition he faces, and knocks all four of the crew out. They awaken several weeks later to find Starbug's been massively improved... so that the Simulants can have more sport hunting and killing them. The four talk tactics, the Cat points out they're in a game of Cat and Mouse, and there's only one way to win: Don't be the mouse. They never win.

So in total defiance of all logic, they fire on the Simulant ship. By a complete and utter fluke of logic, it fatally cripples the Simulant ship, preventing them from firing back. Their last resort is to transmit a little something called the Armageddon Virus into Starbug before they blow up. The virus quickly takes over the ship, locking it on course with a volcano moon. Kryten thinks he can engineer a countervirus before they land, but it'll take all his run-time. Plugging himself into the VR simulator, Kryten's last words are for them to "watch his dreams".

They do so, finding that Kryten's systems and the simulator are contextualizing Kryten's battle as part of the Wild West game, with Kryten as the sheriff. Problem is, he's a cowardly drunk, easily cowed and intimidated by the Virus' avatars, the Apocalypse Boys. An outraged Lister decides to help out, and the three load themselves into the game, complete with specialized skills of their characters. Their attempts to talk to Kryten don't work too well - he tries fleeing the game, which would mean certain death for the crew. With a little tough love, they drag him back, and tell him about everything.

Unfortunately, in the time they've talked, the Apocalypse Boys have lost patience. Bolstered by their skills, the trio are pretty sure they can take them... until Brother Death infects the simulator, robbing them of their skills. Outgunned, Lister, Rimmer and the Cat leg it, unplugging themselves, leaving Kryten alone. But he's not worried - their scrambling has given him the time to write the dove program.

The Dove Program immediately overpowers and kills the Apocalypse Boys, freeing Kryten's system of the virus. He revives and the crew rushes to upload a copy into Starbug's system, just as the ship crash lands into the boiling lava fields of the volcano moon...

And then triumphantly flies back up into space and off into the sunset.