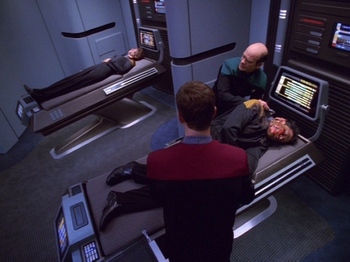 The aftermath of this would be the death of one ensign, and the descent into madness of one hologram.
The Doctor is surprised to find evidence of an old surgical procedure he did on Harry Kim that he cannot remember. When the Doctor investigates the matter, he finds degraded memory files involving one Ensign Ahni Jetal, a crewmember he also has no memory of. It soon becomes apparent that someone on board Voyager is determined to stop him from finding out the truth.