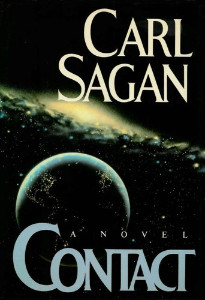 A romance written by Carl Sagan, it tells the story of our first contact with extraterrestrial intelligence... but in a manner much more realistic than the usual portrayal with UFOs and impossibly quick interstellar travel.
Advertisement:

Ellie Arroway, a radio astronomer working in Socorro, New Mexico, discovers a steady and clear signal coming from a point in space that corresponds to the distant star Vega. The signal is confirmed to be legitimate, and soon a worldwide effort is made to receive the message whole (due to the impossibility of monitoring the same spot in the sky as the Earth revolves) and then to decipher it, while religious and political uproar rises all around.

The novel, which is over 400 pages, features very little of the actual aliens; in fact the moment of First Contact is covered in only one chapter. Instead the plot revolves around human reaction to the idea that we are not alone in the universe, from religious viewpoints to national policy to the fact that they apparently learned about humanity through its TV, most of which is garbage. It's also about Ellie coming to grips with her inner and interpersonal troubles at the same time as she copes with the awesome prospect of life on other worlds.

Was adapted into a film in 1997. Not to be confused with the unrelated game Contact or the trope First Contact, although the plot centers around the latter.