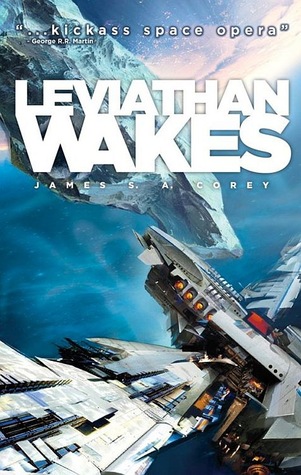 The Expanse is a series of Space Opera novels by "James S. A. Corey", the pen-name of authors Daniel Abraham (The Long Price Quartet) and Ty Franck. Set a few hundred years in the future, humanity has expanded into and colonized large parts of the Solar System.

As of the beginning of the series, the three main political powers are Earth, Mars, and a rough coalition of "Belters" who inhabit the asteroid belt and many of the outer moons. These groups have been in economic dependence and conflict for almost as long as they've existed, but now shadowy conspiracies are pushing humanity to the brink of outright interplanetary war. As if that wasn't bad enough, in the midst of all this a virus-like alien "protomolecule" with horrifying capabilities has been unleashed and threatens the existence of all mankind.

Against this backdrop, the series mostly focuses on Space Trucker James Holden and his crew as they try to navigate through the increasingly dire political/cultural/existential crises plaguing the solar system, all the while trying to make a quick buck. Each book features new protagonists and side-characters, with the one constant thread throughout the series being Holden and his crew.

The technology featured in the series is relatively realistic but not described in detail. An unexplained breakthrough in fusion and drive technology (the Epstein Drive) has made interplanetary travel possible but there isn't any FTL travel and thus no interstellar voyages have been attempted yet.

The series consists of the following novels:

The novellas The Butcher of Anderson Station, Gods of Risk, The Vital Abyss, The Churn, Strange Dogs, Auberon, and The Sins of Our Fathers also take place in the same universe and serve to tie the novels together. A short story, Drive

, is a prequel concerning Solomon Epstein and the discovery of the Epstein Drive. A compilation of the short stories called Memory's Legion was released in 2022.

A TV series, produced by Syfy, premiered on December 14, 2015. Syfy cancelled the series on May 2018 to much fan, media and celebrity backlash. During the 2018 ISDC, Jeff Bezos (himself a fan of the books and show), announced that Amazon Studios has picked the series up for additional seasons.

The Expanse series contains examples of: