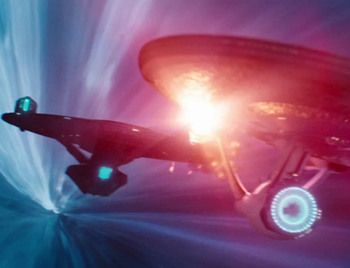 Guess which one is the Dreadnought. Go ahead, guess.
"No, General... We can do this! We have a chance to take down a dreadnought! These things are fleet killers! We can't let it get away!"
— Poe Dameron, Star Wars: The Last Jedi
Advertisement:

When dealing with navies (or, occasionally, armies with vehicle support) in fictional settings, there is usually one class of vehicle that just outclasses everything else. It's the biggest, baddest, meanest thing flying (or walking, or rarely rolling), packed with weapons, armored (and possibly shielded) to withstand a whole other fleet's worth of firepower, and may be The Battlestar on top of it all. It's a fleet unto itself, it changes the face of the battle just by showing up, and conventional wisdom is that it can only be taken down by something just as powerful as it is. It is The Dreaded when it comes to large-scale vehicle combat. There is a strong tendency for such a vehicle to be called a Dreadnought.

, a British battleship which revolutionized naval warfare for decades to come. Combining heavy armor, high speed, and a relatively small battery of relatively large guns, Dreadnought rendered every other battleship afloat, henceforth known as Pre-Dreadnought Battleships, obsolete. Ironically, Dreadnought was bordering on obsolescence by 1914 and the outbreak of World War I due to rapid advances in shipbuilding, leading to bigger, more powerful, and more heavily armed Dreadnoughts (with later examples known as Super Dreadnoughts).

In naval or space-based settings, expect a Dreadnought to pull double-duty as a Supervillain Lair.

Note: The vehicle in question must be specifically identified or referred to as "a dreadnought" to qualify for this trope. A vehicle not called "dreadnought," no matter how powerful or scary, is not this trope.