We Will Wear Armor in the Future 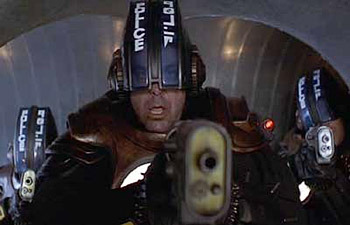 In many science-fiction works most if not all soldiers and or police (especially Space Marines) wear roughly as much plating as a medieval knight, often being Powered Armor or made of composite materials (which does a decent job justifying it when those occur, since they alleviate the issue of mobility which would otherwise be compromised by such extensive coverage). Oftentimes this armor is portrayed as being completely useless, though sometimes it's stated, if not demonstrated, that the armor is completely bulletproof, it's just that they're using lasers - or the other way around if Kinetic Weapons Are Just Better.

Might be justified in that (though most militaries prefer mobility over protection) the armour provides very reliable protection against the weapons the soldiers are up against (like plate armor at its advent in the medieval times, with the armour making its wearer very hard to injure; once more ways to bypass it arose, to be fully armored fell out of fashion). Or if the armor is supposed to double as a space suit (which are already bulky and cumbersome).

As an aside, personal armor technology has improved dramatically in the last fifty years, whilst the average infantry rifle has actually become less powerful (cartridge sizes have decreased for the sake of accuracy, ergonomics, ammo capacity, and automatic fire capabilitynote An average soldier can carry two to three times more 5.56mm ammunition than the older 7.62mm ammunition and the rifles that use it are lighter and easier to handle and more accurate and both rounds are equally lethal against unarmoured enemies.). For this reason, this trope is increasingly looking like Truth in Television.

Alternative Title(s): We Will Wear Armour In The Future