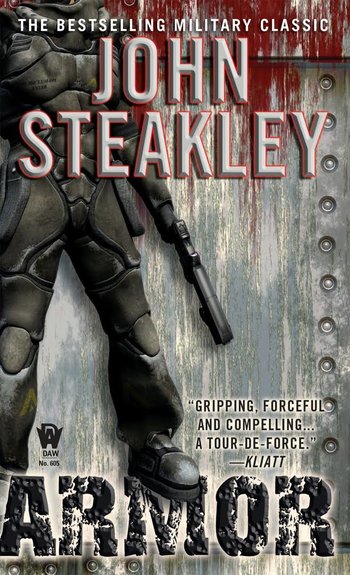 "That's the problem with armor. It can't protect you from who you are."
Armor is a 1984 science fiction novel by John Steakley. It's the distant future, and humanity is embroiled in a Bug War with the implacable, incomprehensible Ants. There's an epic Space Opera backdrop, but the story takes place among the little people at ground level, for whom their own high command also seem distant and incomprehensible.
Advertisement:

The first follows new recruit Felix, who joins up in the hope of finding a meaningful death and an escape from his traumatic past, but discovers himself to be constitutionally incapable of giving up and letting himself get killed, no matter how hopeless the situation appears to be. He not only survives more battles than any soldier in history, but winds up collecting a whole bunch of new traumas as well.

The second, set some years later, follows mercenary Jack Crow as he infiltrates a remote space colony to help steal something from the research base there. Shortly before arriving, he encounters a derelict spaceship containing a suit of Powered Armor, and takes the armor with him as a memento; the research base's head historian, Hollis Ware, finds the suit's blackbox/recorder pod and becomes obsessed with finding out about the armor's former owner.