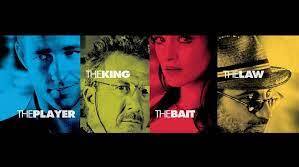 So I'm dead...
Jake (except he isn't)
Advertisement:

Jake Vig is a Con Man who, at the beginning of the movie, has pulled off a successful con with his crew on Lionel Dolby, an accountant. Unfortunately, Dolby happens to work for King, a mobster, and King, not happy that he lost money this way, has Dolby killed, along with Al, one of Jake's men. To make it up to King, Jake proposes he pull another con on a mark King chooses, and they divide up the money. However, there are a couple of problems. One, King chooses Morgan Price, a banker who's also involved with the mob, to be the mark. Secondly, Jake is being pursued by Special Agent Gunther Butan, an old adversary of his.