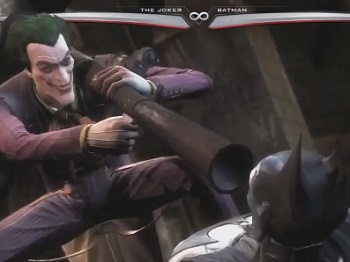 Only a complete lunatic would use a bazooka that close to the targ— oh, yeah. Right.
"I will explain to my Legions of Terror that guns are ranged weapons and swords are not. Anyone who attempts to throw a sword at the hero or club him with a gun will be summarily executed."
— Evil Overlord List, Rule #197
Advertisement:

The inability of a long-range weapon user, especially a villain, to use said weapon at long range. It seems that they are aware only of the trope that extended weapons get knocked out of hands easily, and thus will hold those weapons close to themselves. Why they monologue and walk closely to their target is unknown, since this is usually a good chance for the unarmed target to wrench it away or for an annoying Side Kick to club them from behind.

This may be because extremely long-range fights don't look as exciting. Watch a YouTube video from coalition forces in the Iraq war or in Afghanistan and notice how rarely you can even see the enemy apart from the occasional muzzle flash. That being said, in many cases, effective range is only a tiny fraction of a weapon's maximum range due to visibility, concealment, battle stress, and suppression fire. It's hard to be accurate at a kilometer even if your weapon can reach out that far, unless you have plenty of time to aim.

To a certain extent, this happens in virtually every science-fiction show featuring futuristic vehicles or starships. Rule of thumb: if you can see the enemy ship, you're close enough to be instantly vaporized. Because 1 km was not far even for WWII artillery and it's point-blank range for space weapons: to be useful even in ICBM interception, let alone defense from spaceships, they must be effective at least up to 100–1,000 km. Of course, that doesn't make for particularly entertaining viewing, which is why we have nice things like Deflector Shields.

Commonly shows up when using a shotgun or a hand grenade. May result in a No Scope kill with a Sniper Rifle. Contrast Sniper Pistol, where the weapon has range far better than what it's supposed to have in Real Life, and Arbitrary Minimum Range. And don't confuse with No Range Like Point-Blank Range, where getting up close and personal with a long range weapon is a conscious effort.

See also See the Whites of Their Eyes, which is this trope for spaceships. The inversion is Throwing Your Sword Always Works.