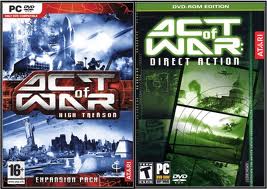 The Act of War series is a Real-Time Strategy franchise developed by Eugen Studios (now better known for the Wargame series) and published by Atari, which is based on the works of Dale Brown and features modern warfare along with some 20 Minutes into the Future sci-fi technology, excellent 3D graphics, pre-rendered Cut Scene videos and its own music. The game was originally released as Act of War: Direct Action and has an Expansion Pack named Act of War: High Treason. There's also a Spin-Off Tower Defense game called Act of War: Urban Defense.

There are three factions in the game, United States Army, Task Force Talon and the Consortium.

The story centers around the efforts of Task Force Talon, an elite US counter-terrorism force led by Major Jason Richter, to fight back the actions of the Consortium, an extremely powerful international organization conspiring to manipulate the economic order of the world for their own gain. Task Force Talon must counter their operations across the world, including in America itself.

Another highlight of the game is the realism of the combat mechanics. Units have a limited range of sight, which can be further restricted by terrain and structures, and can be critically injured from taking too much damage, utterly disabling them. A unique feature is the Prisoner of War system, where critically injured enemy troops or non-combat personnel from destroyed vehicles and buildings can be captured and sent to specialized buildings where they produce additional income. Capturing enemy wounded and medivacing/healing your own is an important aspect of gameplay.

Weapons of mass destruction and air raids are available, the latter working with air control towers instead of the usual airfields. High Treason introduces the option to call for mercenaries, powerful specialist units which can fight for you in exchange for periodical payments. It also adds naval combat and amphibious operations.

As you may imagine there are many tropes applied to this game, so it's ordered in 5 folders, one for the game itself, three for the factions and one for the Mercenaries.

A Spiritual Successor, Act of Aggression, has been announced.