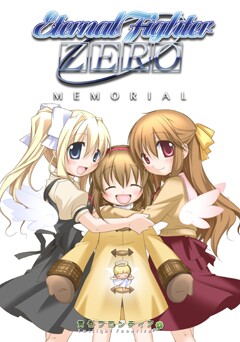 The gameplay is based largely off of other popular 2-D fighters, including Street Fighter, Guilty Gear, and The King of Fighters. Several of the characters' stances and attacks can be traced to characters from these games, along with many Shout Outs. This game is also known for its many in-jokes and references to the original visual novels. The game has a large cast, but aside from SNK Boss Kanna, the characters are all very balanced, as tier lists don't really make as much of an impact as most other fighting games

now with a character page (Under construction).

DOWN! Don't give up. Be prepared for the next round.