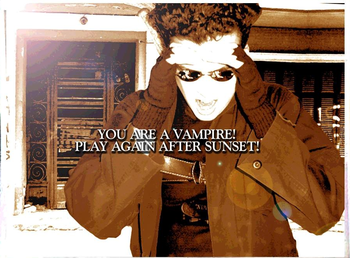 Erevos is a Myst-like first-person Adventure Game for PC, developed by a Greek studio NYX, and published by Grenadios on January 8th, 2002. In it, you play as either Eric Koplot or Giannos Romar: these characters have substantially different backgrounds, but they pale next to what they have in common - both are vampires who have been living for hundreds of years.

Early on, your chosen character runs into a vampire hunter while trying to feed. He prevails, but finds a photo of a fellow vampire Kassandra on his body, with her details and address. He goes to check on her, but is too late: however, he finds the sparse clues she learned about the vampire-hunting cult Erevos, before they arrived to claim her life. From then on, your character devotes themselves to eradicating the group before they fall prey to it themselves.

The game is mostly remembered today for its one fourth wall-breaking feature, where the In-Universe Game Clock was the same as your system clock. This meant that you literally couldn't play the game during daytime, unless you changed your system time - otherwise, the game simply showed you the image above.