open/close all folders
From ONE ~To The Radiant Season~ 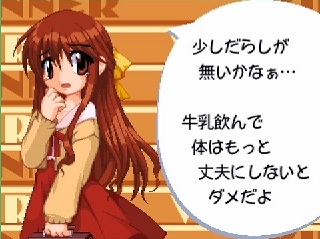 "I was a bit careless there... I need to drink my milk and train my body."

Mizuka is the main heroine of ONE ~To The Radiant Season~, a novel produced by Tactics in 1998: Mizuka is an interesting character who fights with her schoolbag and trusty cello. She can fill the screen with musical notes that can be detonated with a great variety of movements (All of them involving her cello). Due to her moves, Mizuka is oriented to a pressure style of play. 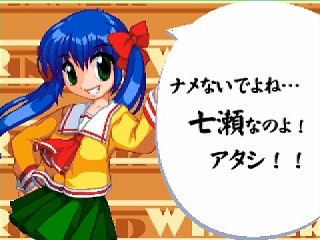 One of the heroines of ONE, Rumi is slow, but really strong fighter. She attacks with a wooden kendo sword, giving her good power and range. She gains Super Armor with some of her attacks, also gaining an advantage against reckless opponents. She's also capable of fighting bare-handed, however, she loses a lot of her moves, her Super Armor and range. She's oriented to an offensive style of play. 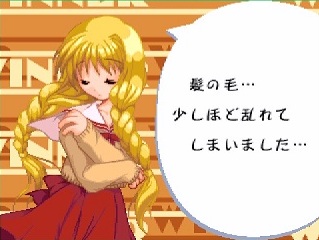 One of the heroines of ONE, Akane is an elegant character who fights using her sharp hair as a weapon. Her friend Shiko is always ready when Akane calls her. Her hair gives her a decent range and her multiple jumps give her some sense of unpredictability 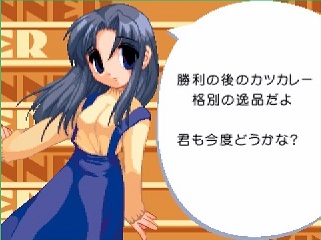 "Katsu curry after winning is a very special gem. How about this time, too?"

One of the heroines of ONE, Misaki is a solid and very mobile character who fights with the power of wind. Her speed gives her an excellent fast game, and her "Guard Attack" property she has for some of her moves, where she attacks on the same time as she defends, gives her a counter attack that is impossible to recoil guard, if used correctly. 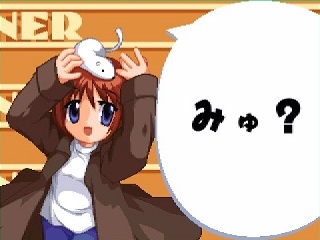 One of the heroines of ONE, Mayu is a small, fast and agile character who uses her animal-like moves to fight. She's considered one of the hardest characters to master in Eternal Fighter Zero, as her special moves include a huge variety and versatility. She can use them to escape, attack at complex angles, or grab and throw with them, and these moves can be used for combos, giving her advantage over her opponents. Mayu is best suited for a pressure style. 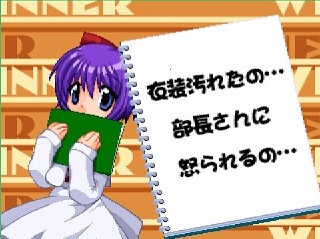 "How to use a sketchbook, I think it's a bit different."

One of the heroines of ONE, Mio is an exceptionally versatile character in the sense that she has two stances: Short Range, and Long Range, which can be alternated with the special button. She uses a vast array of costumes and suits to give some style to her attacks (And for shout-outs). When on Short-Range mode, her style is fast and agile, but this mode leaves her vulnerable to aerial and long range attacks. When she changes to Long-Range mode, her style changes to anti-aerial and keep-away, but she becomes weak to rushdown styles. 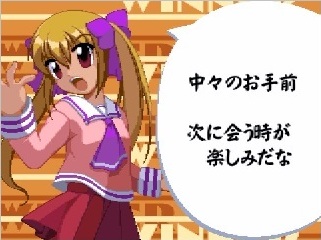 Doppel is a very powerful character who specializes in grapple moves. Punch by punch, she deals more damage than other characters, but she doesn't have any projectiles and her attacks have short range, so she has to shorten the distance to be able to do anything. Technically speaking, Doppel is not a ONE character, appearing instead as an Original Generation. 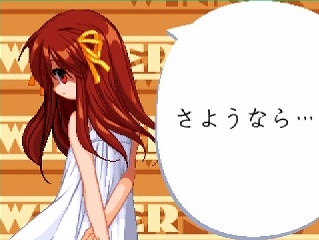 Unknown, also called "Eien no Mizuka" or "Mirror Mizuka", is a small and agile character, who uses several toys as well as her ghostly skills to fight. She can control space with her multi-range attacks, and has the ability to control her flight when in mid-air. Her projectiles has great range on screen and deals considerable damage for a good time, so she can be used for either an offensive, or defensive style of play, however, she needs more time to deal damage than most of the other characters. 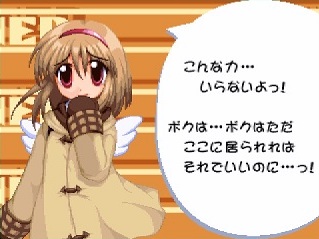 Ayu is the main heroine of Kanon, a Visual Novel produced by Key/Visual Arts in 1999: Ayu is an agile and easy-to-use character who fights with the mysterious powers of her winged backpack. She's oriented to an offensive style of play. 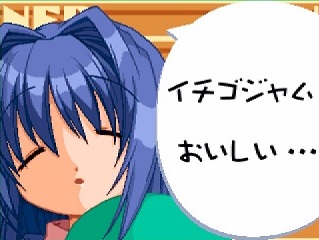 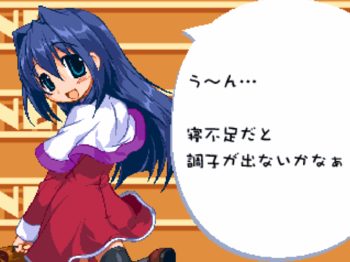 "Strawberry jam is delicious..." (Sleepy Nayuki)
"Hmmm... not getting enough sleep really stops me from doing my best..." (Awake Nayuki)

One of the heroines of Kanon, Nayuki is Akiko's daughter, and Yuuichi's cousin: she's an unorthodox character who fights with her unpredictable "sleepy boxing" style. As she consumes strawberry jam, her offensive capabilities increase dramatically. Her skills are oriented to a pressure style or fast style, depending on how much jam she has eaten. Her jam gauge indicates how much she has taken, It increases every time Nayuki eats strawberry jam with the special button, and she can rack it up to 9, and it decreases every time she's knocked down, till she has none. The more jam she has, she will gain faster and stronger attacks.

Her awake version was introduced in Eternal Fighter Zero -Memorial-; unlike her sleepy version, awake Nayuki is a very fast and agile character who uses her multiple kicks to fight. She's oriented to a rushdown style of play. 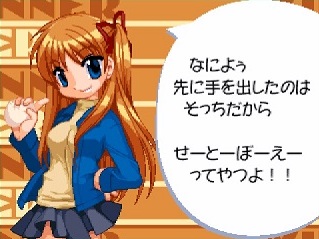 "Stop yelping! You're the one that attacked first! This is what they call "self defense"!"

One of the heroines of Kanon, Makoto is a very fast character who uses her multiple gadgets to fight. Her projectiles can linger on screen for long after being fired, making Makoto an ideal character for a defensive style of play. 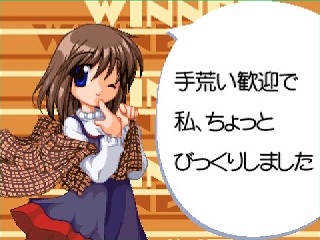 You surprised me a bit... with such a rough welcome.

One of the heroines of Kanon, Shiori is an agile character who fights with the power of anything cold, and a variety of projectiles. With all her long-range attacks and her energy shield, she's accustomed to a defensive style and keep-away game. Her shield technique, called "A sure way to win snowball fights" makes her completely immune to projectile moves as her Shield gauge decreases. 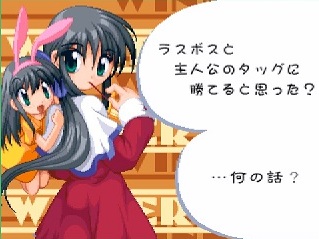 "Our combination of last boss and hero is unmatched... What am I saying?"

One of the heroines of Kanon, Mai is a calm and versatile character who fights with the "Iaijutsu" style of swordplay, and can call a Cute Ghost Girl (Also called Mai) to help her in battle. Her sword gives her excellent attack and range, but she has relative time recovery. Her ghost partner gives her the ability to attack at long distances without taking risks. When the ghost partner is floating normally, a "Time" gauge appears, indicating the time before she disappears. She also disappears when she or Mai is hit, or with certain movements. When she disappears, the "Time" gauge changes to a "Charge" gauge, indicating the time necessary before Mai can call her again. 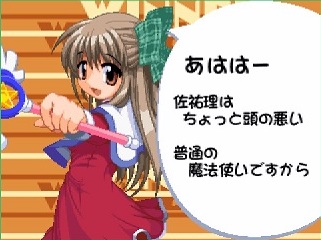 "ahaha... Sayuri is a bit bad, because she's an ordinary wizard."

A support character in Kanon and Mai's best friend, Sayuri is a formal and elegant character who fights with her Magical Girl powers. She has good special moves, projectiles, and a decent method of attacking in mid-air, a command grab, and a 100% profitable counter, making her one of the most balanced fighters in the game. 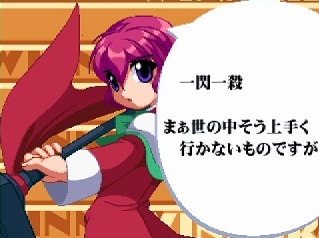 "One hit, one kill. Oh well, I didn't think this would go so well, given how the world is."

A support character in Kanon and Makoto's friend, Mishio is a spear master who can augment her attacks with the elements of either fire, or thunder. Her spear gives her an excellent range in mid-air. However, she can only use half of her moveset with each element, and without one, she has very few moves. She's also the slowest fighter in the game. 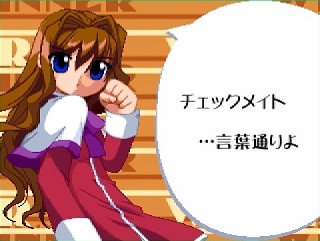 "Checkmate! ... That would be the appropiate expression."

A support character in Kanon, Kaori is Shiori's sister and Nayuki's best friend; she's a very fast character who fights with her unmatched boxing skills. Although powerful at short range, she has no projectiles or ranged attacks, making her weak against long-range fighters, like her sister Shiori. Because of this, she's oriented to a pressure style of play. 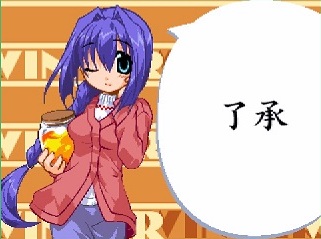 A support character in Kanon, Akiko is Nayuki's mom and Yuuichi's aunt: She's and incredibly agile character who fights with a vast array of household tools. Her multiple aerial hits make her strong in mid-air, and a single mention of her "Special Jam" is enough to make even the most badass of the warriors run away in fear. 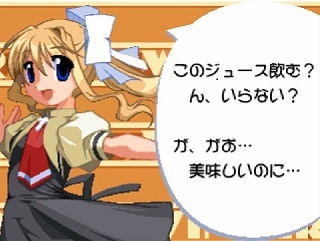 Misuzu is the main heroine of AIR, a Visual Novel produced by Key/Visual Arts in 2000; She's a strong, yet tricky character who uses several traps, poisons, and her crow partner Sora to fight. She has some useful normal moves, and her traps are good to catch unprepared opponents off-guard. 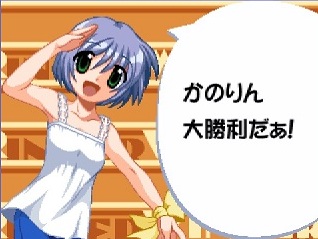 One of the heroines of AIR, Kano is a slow, but well-ranged fighter, and can use elemental magic to keep her opponent at bay. Her magic staff gives her an incredible range even without magic, and refills her super bar without attacking her opponent. Due to her range and powers, Kano is best suited for a keep-away game. 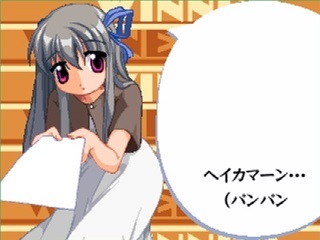 One of the heroines of AIR, Minagi is a fair character who fights alongside her best friend Michiru. She can command Michiru to attack from any spot on the screen, forcing her opponent to keep an eye on Minagi, and the other on Michiru. 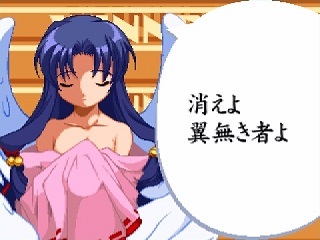 Kannabi-no-Mikoto (Or Kanna for short), is the Final Boss of the game: She's an extremely fast and powerful character who uses her divine powers to crush her opponents. Due to her playable version not being different at all from her boss version, she's completely unbalanced, and inherently stronger than any other character. Because of this, she remains banned from Tournament Play. 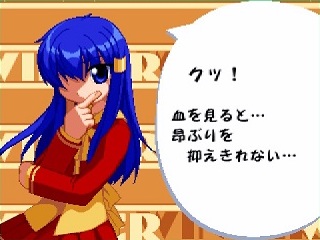 Ikumi is the protagonist of MOON, a Visual Novel produced by Tactics in 1997: She's an exceptionally fast and agile character who fights with the power of blood. Most of her attacks spill the blood of her opponents across the battlefield, and she uses blood to increase her offense and mobility. Ikumi is best suited for an offensive style of play. When her blood bar is completely full, Ikumi automatically activates her Super Mode "Violent Run ~ Genocide Mode", and the bar changes to a "Violent Run" bar, which depletes after a few seconds. In this mode, Ikumi dramatically increases her offense, speed, and recoil guard ability, keeping her from being knocked by weak attacks.