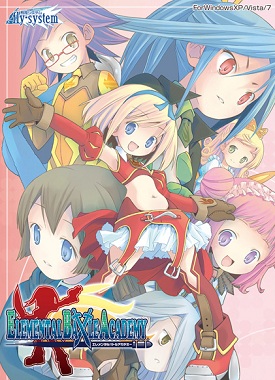 In this game, players can chose from one of six girls, each with their own Elemental Powers, preference of weapons, and abilities to battle it out with the other girls. The game features a Story Mode, an Arcade Mode, and online multi-player. Players can also dress up each of the characters in the game with currency earned through gameplay to purchase various outfits for your characters.

In battle, each character can use their own weapons or ones found in green boxes to defeat the other players. Each character also possess a Elemental Attack that can deal great damage to enemies in a wide radius, and an Elemental Burst mode to buff up their Elemental Attacks. They can also find their spirit animals roaming within the arena to use their elemental abilities or take their elemental magic into new heights.

The game was released on April 29th, 2010 for Windows PC. The doujin circle's official website, where a trial version and patches for the full game, can be found here

(Japanese). A help guide for the game can be found here