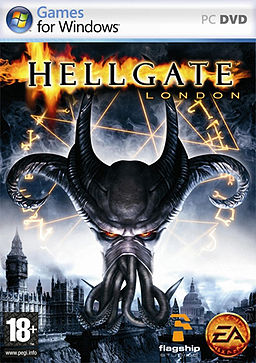 "Remember the dead. Fight for the living."
— Templar Creed
Advertisement:

Hellgate: London is a sci-fi/fantasy Action RPG developed and published by now-defunct Flagship Studios in 2007. Many members of the development team previously worked on the Diablo series and went on to form Runic Games, creators of Torchlight.

In the near future, the world falls prey to The Legions of Hell. Modern-day weaponry and tactics prove largely useless against the hordes. Surviving humans flee underground and much of the surface world suffers from "The Burn", a kind of demonic terraformation.

The game focuses on London, England, in the year 2038. The streets are overrun by demon soldiers, zombies, ghosts and mindless hell-beasts. Survivors dwell in The London Underground, protected from intrusion by Alchemic wards built into the stations by The Freemasons. Most people are just trying to survive in this nightmarish new world, but three large organizations are striving for change and searching for ways to hinder or even push the demons back: The sword-and-light swinging Knights Templar (yes, those Knights Templar), the high-tech Hunters, and the sorcerous Cabalists.

Player characters belong to one of these three factions, each with distinct weapons and methods for combating demons, but the ultimate goal is the same- drive the demons back through the Hellgate once and for all.

The game received mixed reviews due to a massive amount of bugs and a generally rushed impression, and the online servers closed down in early 2009 after Flagship Studios declared bankruptcy. Hanbitsoft has since obtained the IP and is now working on Hellgate: Tokyo

. In addition, a small modding community is attempting to revive

the original game. Finally, Hanbitsoft's relaunch of the game in Korea was successful enough that they are planning on bringing over Hellgate: Resurrection to International shores, which will include HG: London and HG: Tokyo. A short beta of the game recently started (and ended), with more details on the official website, at T3Fun.com

The original game has become a Steam Greenlight game

It was silently released on Steam in November 16, 2018, under the name Hellgate: London, but will promise Tokyo content.

There's also a novel trilogy, by Mel Odom. Since there are no known coding errors with paperback novels, it has very few detractors.

... You're not welcome here.
Feedback

You might notice there's a slight differance in dress code between the male and female members of the Templars.

You might notice there's a slight differance in dress code between the male and female members of the Templars.