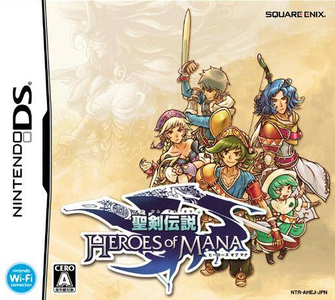 Heroes of Mana is the second Nintendo DS title in the World of Mana series, released in 2007. It is, in fact, a direct prequel that takes place a generation before Trials of Mana, also loosely tying it with Dawn of Mana.

The game opens on the Five-Man Band on their ship, en-route to the kingdom of Ferolia, when their ship is shot down and they are separated. Crash landing in a forest, they are separated and discovered by a beastman patrol. However, they soon discover that their kingdom is declaring war on the rest of Fa'Diel and are using the mysterious Mirrors of Esina to fulfill this agenda. Roget and his friends decide that they have no other option than to defect from Pedda in order to defend the other kingdoms.

The game is Real-Time Strategy and is almost entirely touch screen based.

Heroes of Mana provides examples of the following tropes: